Sunrise is at 5 am here and included in the cost of the room is the choice of a number of organised activities. We decided to start the day with a bird watching hike. Our guide was very knowledgeable and we were able to see some 20 species of the local flocks, including Chacahalaca , Tanger, Pelican and Fly catchers.

Back to the hotel for breakfast, it has open sided views of the infinity pool and beach below that instantly melts any stress away. On top of that the food is pretty great, fresh fruit, squeezed to order Juice and a range of plated hot food.

A nice walk down to the beach with a sighting of a huge grey Iguana, we were not quick enough to photograph it but here is a Google Image 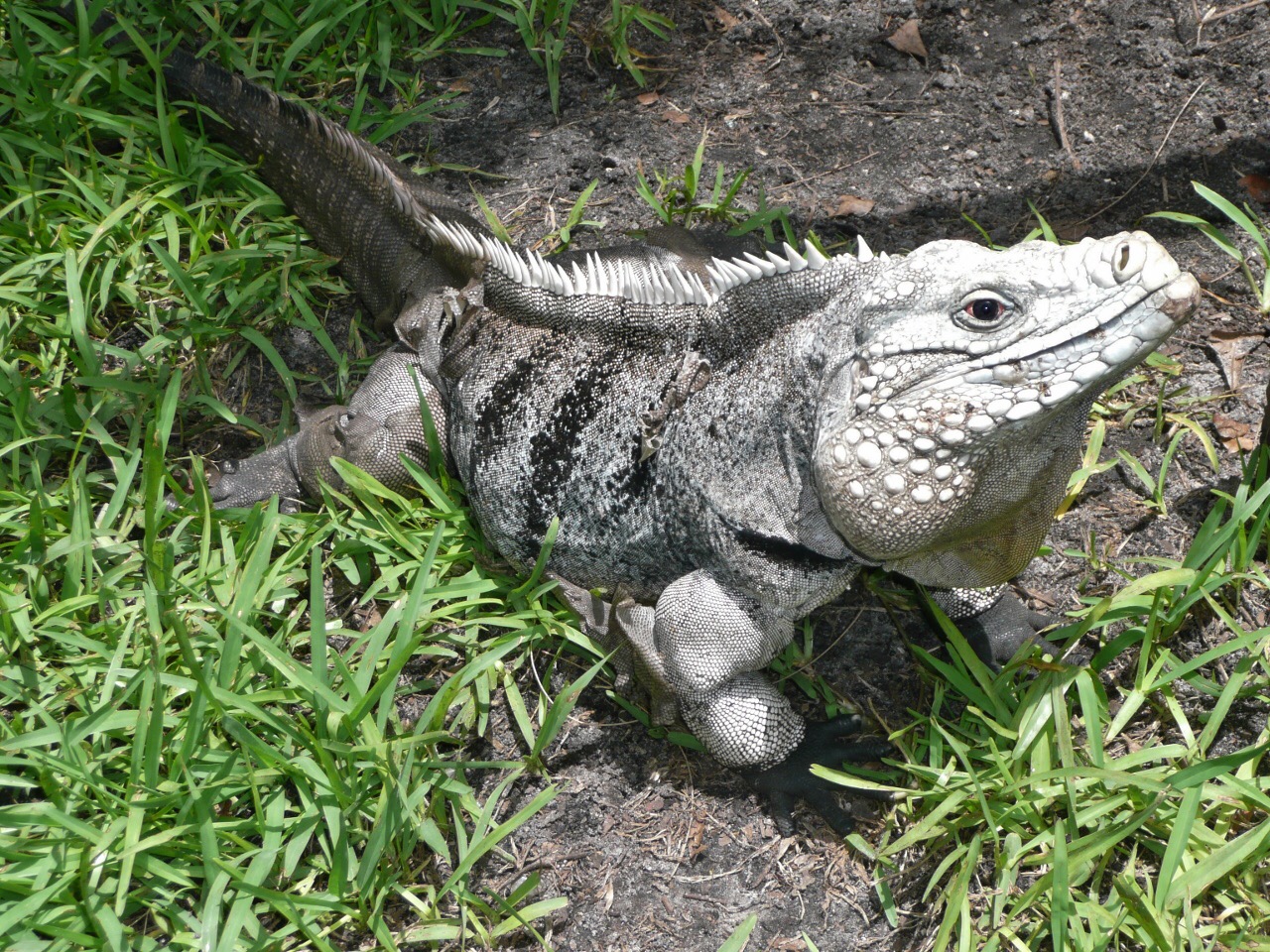 There is a beach club belonging to the Hotel on the shoreline so after a brief walk along the edge of the ocean we settled ourselves into a cabana and were brought drinks, lunch and great conversation by the waiters. 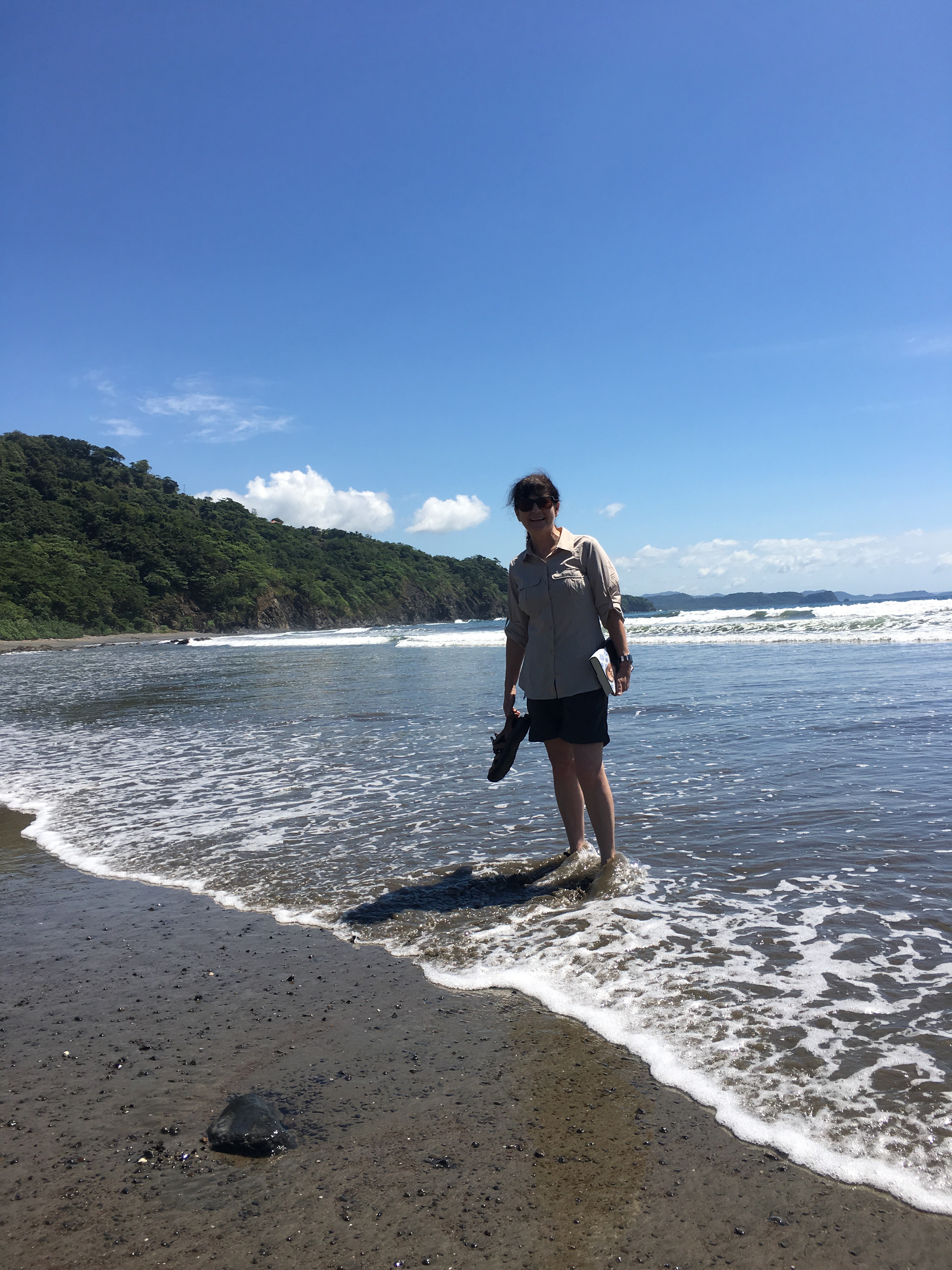 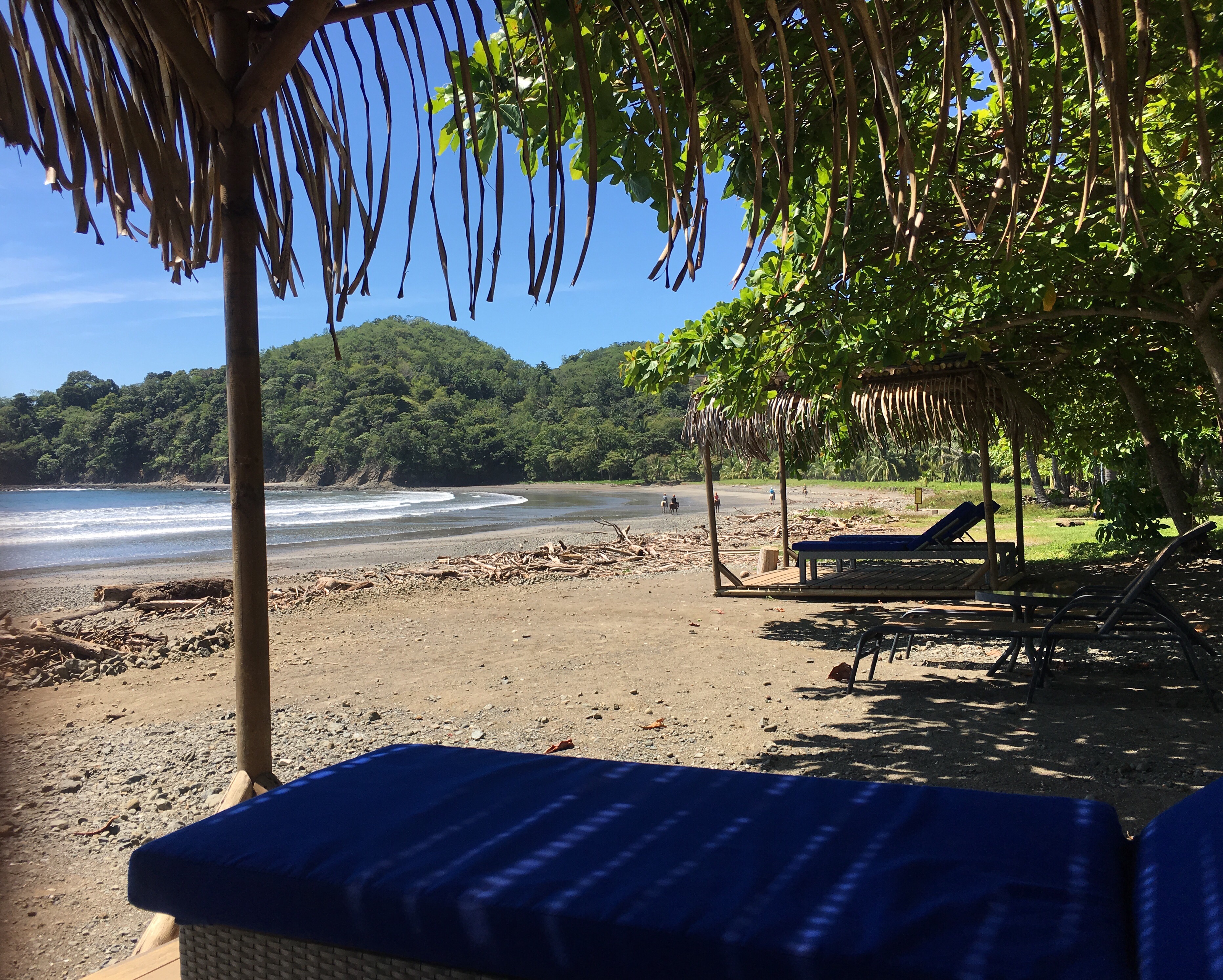 At 2 pm we went and joined our guide, Eduardo, to go in search of monkeys. The most common monkey in the region is the Howler monkey. They live in troops of between 2 and 40 and sound like a very deep dog howl. Thanks to the amazing telescope the guide carries we were able to find some but they were too far away for a decent picture, so again, thank you Google. 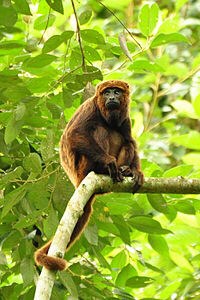 We were also able to see a small male Iguana sitting in the tree and the level of detail you could see with the telescope was impressive, shame that they cost about 3.5k because I would have been tempted to purchase one, the telescope not the Iguana!

We did see a lot of Coatimundi which are part of the racoon family, not too scared of people and we have seen them all over the grounds of the hotel. 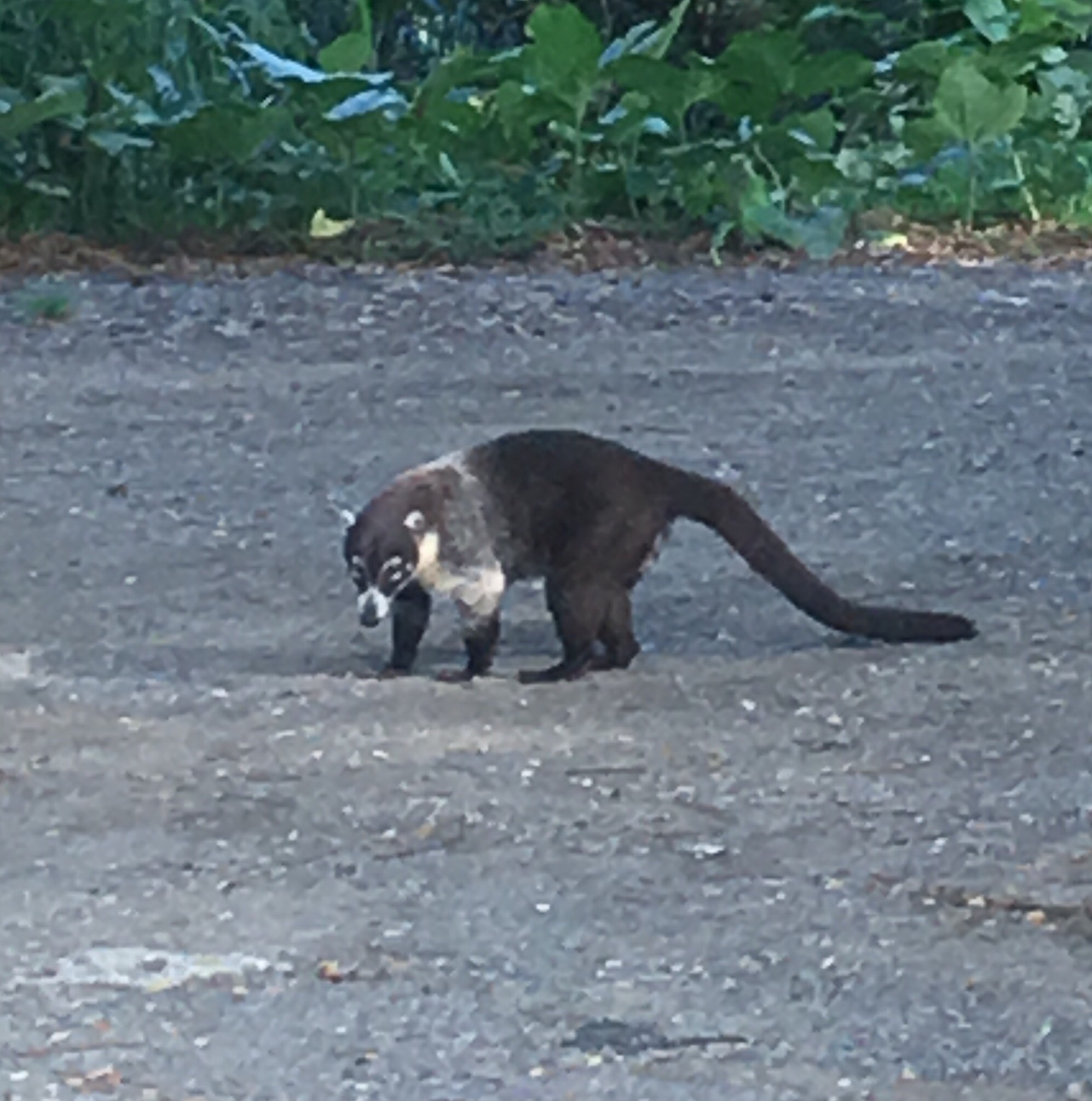 After a relaxing chill out in our own little jacuzzi, we headed back to the restaurant for and early dinner as we had also signed up for the turtle hike 🙂 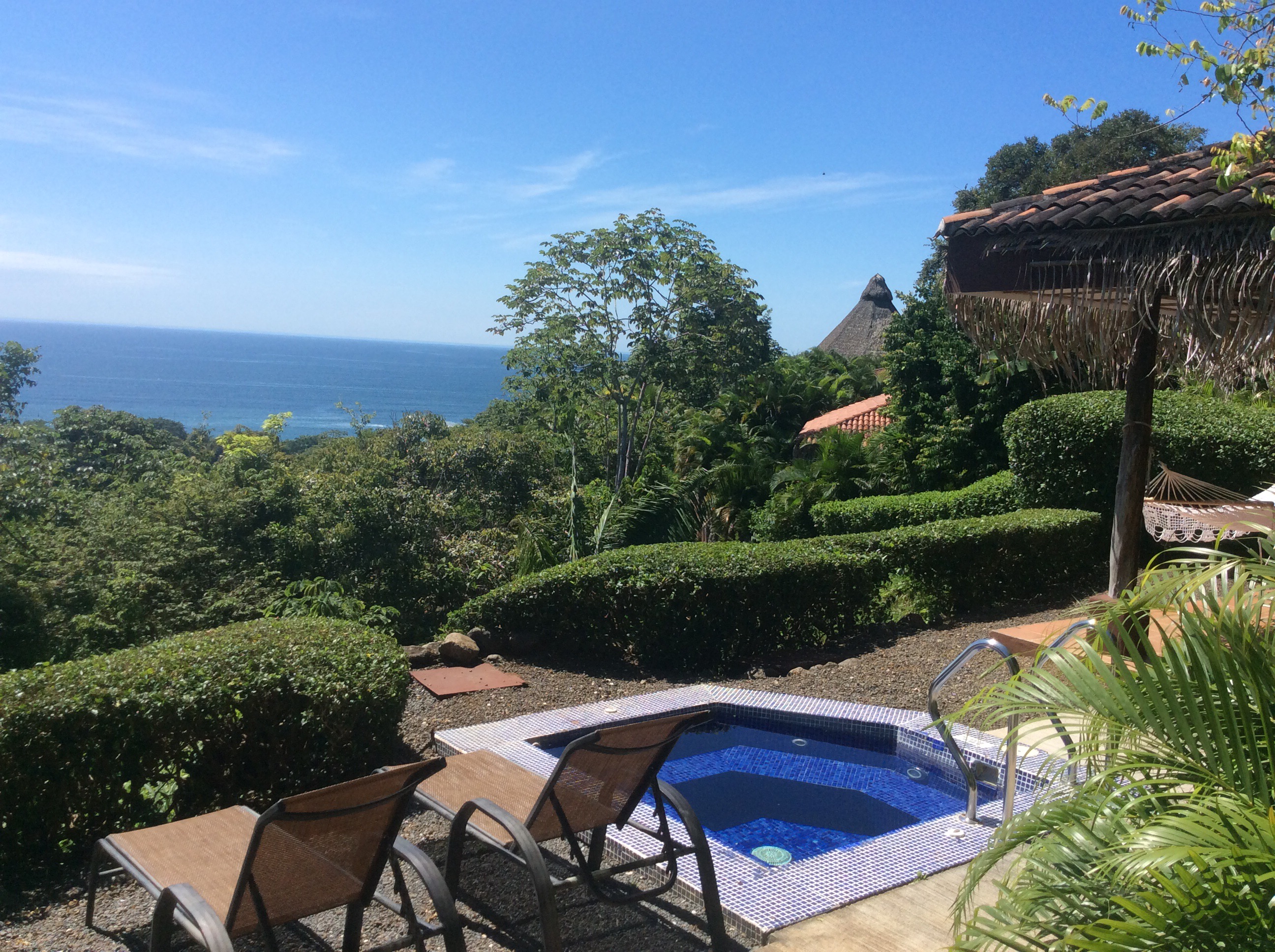 7pm, note that sunset is 5pm, we set out in the van with Eduardo and 4 other guests over to the next beach along, the trip itself was an adventure as we drove over the hillside on another deeply rutted dirt track. No lights except red ones were allowed on the beach but with the moonlight it was surprising how much you could actually see. The plan was to just walk back and forth along the shoreline until we saw the tell tale drag marks of the turtle as she exits the sea and heads up the beach to lay her eggs. One sweep of the beach was about 30 minutes and on our 3rd trip halfway along we were lucky enough to see a young turtle actually laying her eggs. We stayed with her till she finished and then watched her fill in the hole and head  back out to sea. On the way back to the van we were able to see another turtle just starting the dig out process prior to laying her eggs. As flash would have disturbed them, once more thank you Google. 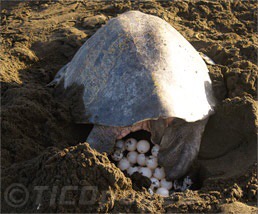 Wow and this was just day 1