Well the rain kept up all through the Thursday as well and then a cold front came through bringing winds and 30 degree temp. This cardinal looked like he was as fed up with it as I was. 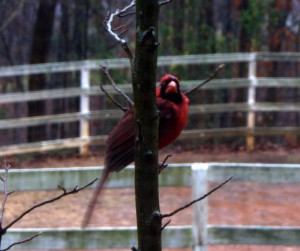 I was due the delivery of my new sewing table and the delivery company said it would arrive between 2pm and 6pm – at 6pm I rang them and they said it would be coming at 7.30 and at 7.30 the van driver rang to say it would be 8.30 to 9. At 9.40 they arrived, they were clearly at the end of a long day as they man handled it into the sewing room ( I would like to point out – no stairs and straight through a patio door) they took the packing of and I inspected it found no damage and off they went. Next morning I realized I was missing a castor so I rang the company and I have to say that the customer service was excellent. I fully understand that sometimes things just go wrong but its more about how people react to it. The company was extremely apologetic and are not only sending me a complete set of castors but also an additional gift that will be very much appreciated. The cabinet is fantastic and I have to say they did a great job of correcting an error that was not even theirs ( they use an external delivery company)  I would have no hesitation in recommending a Koala Studio Cabinet  from Sewing and Craft Club

I woke up Friday morning to at last see blue skies but man it was cold going out to sort out the chickens and the Pacas. As I worked at my desk a couple of the chucks came to see me and also one of the squirrels realized just where he had put his food.

Friday night I went to downtown Atlanta to help some good friends of mine serve hot food to about 40 of the local homeless. I have to say I was impressed with how polite patient and helpful they were whilst we set up the tables and started to plate up the food. We were also able to hand out some clean socks, gloves hats and blankets. I am really glad that I was able to help even in such a small way.

Saturday Morning I drove over to Powder Springs to the home of yet another Alpaca farmer, this time they had Suri’s ( Mine are Huacaya) really cute and they also had some youngsters that were under 2 months old. I joined the ladies for a lovely lunch followed by 4 hours of Spinning ( wool not bike) and great conversation. So far Southern hospitality is living up to every thing I thought it would be.