Back in November, when we were getting crazy quotes for moving us south, I had a fit of Meldrewesque pique and declared that I would “do it myself”. Well it’s been an adventure and I’ve had to rely on the goodwill and hard work of friends. It has certainly not been the easiest option.

I pulled the first U-Haul trailer down through a snow storm the day after Christmas. One of us had to be on site to feed the alpacas. Having set up Miss Lynne’s working environment, she traveled down to join me, Cagney and Lacey, five alpacas, six hens and three barn cats. It was great to be together again.

In the middle of January, having checked the weather forecast, I decided to return to New York to collect our remaining belongings. The girls came along for the ride starting out at 4.30am and we were back in Pine Bush by 8pm. They were so excited to race around their old territory. It wasn’t hard to get to sleep that night.

Next morning started with a call to the oil company to get a delivery that day. We have to keep the property heated at a maintenance level to avoid burst pipes and to avoid that musty smell an empty house can quickly gain. The early morning tv forecast snow for the next day and the oil truck would not be able to get up the drive. Thankfully, things worked out and the delivery was made.

It was Tuesday and I planned to collect the U-Haul truck early on Saturday morning and be ready to leave Sunday lunch time. Doing it yourself is just not possible when it comes to moving furniture and appliances. I needed to find help to load the big stuff. I also needed to disconnect the prop- shaft on the old truck to tow it behind the U-Haul. Then there was the snow and would I be able to get the U-Haul up the driveway. I have to say that I was concerned. 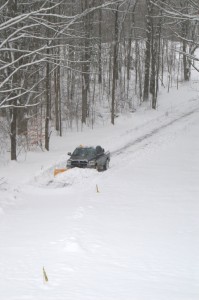 Bob links us to the outside world again

I did wake up to about 5″ of snow on Wednesday morning but I had lots to do inside. First good news came from Gil who emailed to say he’d be around later to help carry the big stuff out to the garage. Shortly after lunch, Bob the snow plough man, cleared the driveway. Bob and his family have been in Pine Bush forever so I asked him if he could recommend somebody strong to help with my Saturday loading. We chatted about my plans and concerns. I didn’t realise how important that conversation would turn out to be. By the time I turned in, it was Thursday and 90% of the heavy stuff was in the garage and the kitchen was filling with boxes.

Thursday I was up very early and spent all day filling boxes. So many that I ran out and had to go fetch more. I lost count of the boxes labeled “sewing room”. The place was beginning to look like a warehouse but there was lots more to do.

After another early start with packing on Friday and a bit of good news from realtor Wayne, his eldest and a mate would help with loading. I thought that I’d better attempt to disconnect the Dodge prop-shaft. The snow had pretty much melted so getting under the old beast wasn’t too bad. I had taken the advanced precaution of spraying the four bolts with a penetrating fluid but I quickly realised that I didn’t have the right spanner to release them. So off to town I went to see what I could find. Not much was the answer but armed with the best I could find, I was ready to give it a go. Just as I was about to get under, Bob turned up. He’d thought about our conversation and had realised that I might have problems getting the old bolts loose. He came prepared with an impact wrench and the job was done in a few mins. Things were looking up even more when Bob announced that he and his wife Jean would come around and help with the loading too. Not only that, but he’s also give me a ride to pick up the U-Haul truck first thing. What a star!

Bob wouldn’t stand still long enough to get a photo

Bob arrived at 7.55am on Saturday morning to take me to the U-Haul office and we arrived back with the truck before 9.30. After that it was a blur. The two youngsters were bringing out the boxes and Bob and I were cramming every little space with something. Meanwhile jean was inside packing up the kitchen. By the time we lost daylight we were left with some very tricky packing left to do. Still, all the big stuff was on board so I could now manage on my own. Not that Bob was going to let that happen,

Jean gets to work on the kitchen staples

Having slept on the problem, I worked out a way to create an “upper level” shelf. It worked a treat and with Bobs continued help we completed the loading. OK, just the old truck to secure on the tow dolly. Only problem was that the truck would not start. The battery was flat. I have a set of jump leads but they were somewhere deep in the U-Haul. Bob to the rescue again! With the Dodge secured I was pretty much ready to roll. Just a few final thing to sort out around the house and I’d be off. Well those last few things turned out to be something of a comedy, perhaps a farce. The two most time consuming were having to go into town for batteries to the heating thermostat and then unloading the cabin area of the U-Haul to search for my glasses. They had somehow come off the top of my head and where laying, in the darkness, in the driveway. Poor Cagney and Lacey. They had to witness such a “Victor” moment. The upshot was that we didn’t get away until 10.30pm.

All loaded and ready to roll

Once on the road, all our problems, like the miles, drifted away in the rear view mirrors. The girls settled into their cramped accommodation and were as good as gold. At 2am I pulled over in a rest stop and had a surprisingly good 4hrs sleep before hitting the highway again at a relentless 55. Sunrise was lovely and the Shenandoah Valley quite a spectacle due to recent snowfall. I have done this trip so many times now that I don’t need a map or gps. Just for a change I took the northern route through Knoxville and Chattanooga. I was back in the house at 11pm.

Pennsylvanian sunrise from I-81

Scotland PA that is.

From the bottom end of the Shenandoah Valley

One of our Atlanta friends, Patrick, had kindly volunteered to help unload and place the heavy items. It took us all day. Finally that just left me the job of cleaning the U-Haul and getting it back to the depot. A happy end to a U-Haul adventure.

There is still the task of retrieving the Big Dodge truck and a few bits and pieces left behind. One more long drive to go!

I totally under estimated the effort involved in this little exercise. Yes, it all went well and we did save money. However, it was stressful and would have been a disaster if not for the enormous help of a few very good friends. I am hugely in your debt. Thank you all.

1 thought on “New York and Back”