The park here is really nice and it is nestled in amongst a mountain range with fantastic scenery. We decided to go out for a scenic drive in the early evening – First stop was the Popcorn Overlook 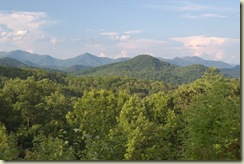 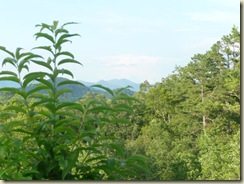 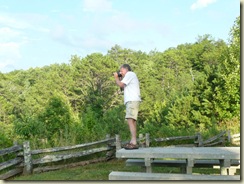 Then a short stop at the edge of Lake Burton to admire some of the houses of the idle rich. 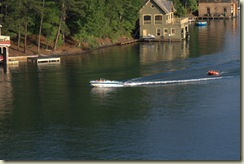 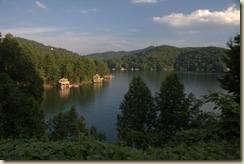 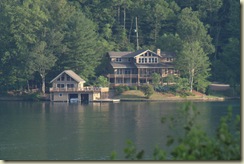 One last stop, we read that Tate City had good views, the bit they left out was that we had to drive through the forest on a dirt track to get there which in the truck was a bit like being in a dinghy coming down a river. To cap it all this road was nearly ten miles long and the views in Tate City were not as “spectacular” as the write up said they were.

We got up early on the Tuesday to go and hike the Tallulah Gorge – they only let 100 people in per day so we wanted to make sure we could do it. We ended up being the first there. You have to go down over 150 steps cross a rope bridge across the gorge then down another 230 steps and then the adventure begins! 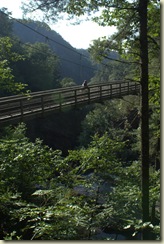 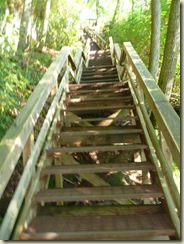 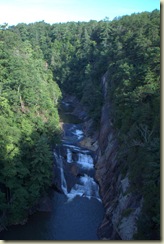 The adventure begins with a trip back across the river by scrambling over boulders in the river ( which are very slippery when wet ). 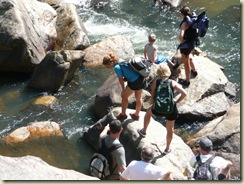 Did we make it across dry ?…….. no we both ended up with one wet foot, luckily the weather is still so warm it was hardly noticeable. We then had a scramble down alongside the river past 4 waterfalls. The last of which is called the bridal veil and people slide down it into the pool below. 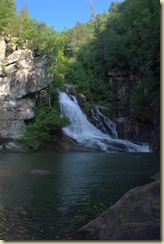 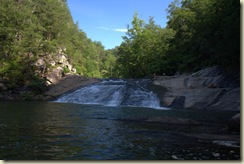 The way back was just as interesting with chances to stop and enjoy the views and also prepare ourselves for climbing back over the river. 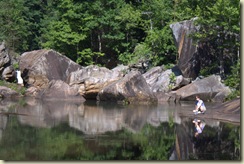 So did we fare better on our return trip over the river ? ……….. well the plan was for Rob to go first, deposit the backpack with the cameras in and then come back to help me a bit. He did quite well, just the one wet foot. Me, not so good, slid down one to the rocks and was wet from the waist down. Rob grabbed my sun glasses then 2 mins later slipped again and dropped my glasses into the river. Ever the gentleman he then went back and tried to retrieve them, without success. 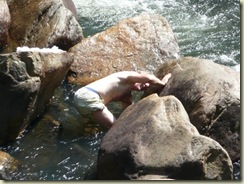 Now deep joy, we just have those 350 odd steps to climb ! on the way back we passed a shop called Goats on the Roof – and that’s exactly what they had. The roof was covered with grass and they had small goats wandering around up there. 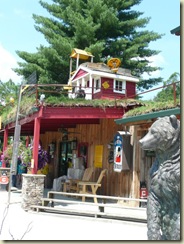 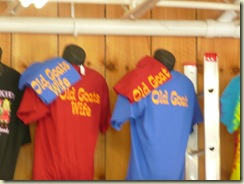 Wednesday started with a slightly overcast day and no internet or cell coverage to the site. So we changed our plans and went for a hike on Dicks Creek it was a gentle mile down to the Chattooga river. They must have had some severe weather last week as we could not join the river trail ( bridge was out ) or the Bartrum trail ( trees down ). 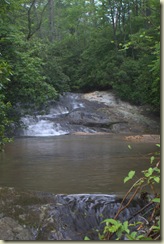 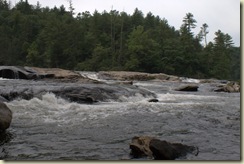 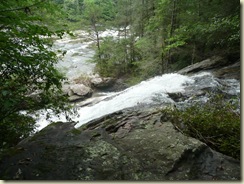 On the way back to the camp we stopped at a great farmers market. We went swimming in the camp pool and then a nice BBQ outside before packing up as much as possible ahead of our next journey. Tomorrow we head for Tabor City NC, 20 miles from Myrtle Beach and a RV park within a working vineyard.