Up early last Thursday to drive a little over 400miles from Northern Georgia to a site just on the border of North and South Carolina. Here is a picture of the rig just before we set off 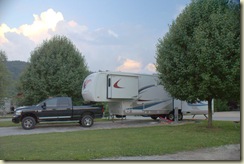 The trip was a little challenging for the first and last 75 miles as we were hauling the RV on some pretty small roads. Plenty of time to knit though, I had already finished knitting the bunny she just needs to be assembled and stuffed. So my latest efforts are a shrug for me. Here is the first sleeve and the start of the back. 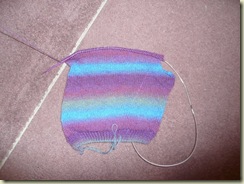 Our campsite is right out in the countryside set in a small family run vineyard. They have a pond with a family of geese, who also seem to like walking around the vines and a frame with many gourds hanging of it and lots of baby birds housed in them. 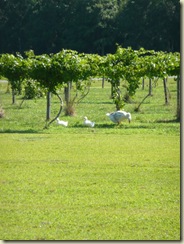 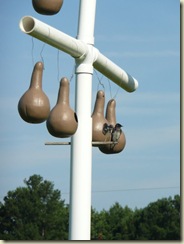 On the Friday we drove to the town of Calabash, famous for its seafood eateries and then on into sunset beach. Unfortunately dogs are not allowed on the sand between 8 and 6 during the summer months so we just had a quick look and then headed off down to North Myrtle Beach. We will have to come back here in the off season. 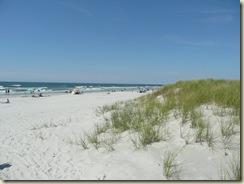 The main road through the area is wall to wall food and shopping so we stopped at a local diner and i got my first taste of grits, I have to say I quite liked them much to Robs disgust. We had a quick walk on the Boardwalk at Myrtle Beach and then headed back to the campsite ahead of the crowds.

There is no cable connection at this campsite and so we had a nice evening listening to my ipod playing in shuffle mode.

Saturday we were up bright and breezy as usual and drove to a place called Murrel’s inlet, it is a small fishing harbor with a boardwalk and some nice pubs – so after a pleasant walk with the dogs we sat on the patio at the Dead Dog and got treated to some good food and a live band.  It was funny to see a small island opposite the pub that housed a family of goats. 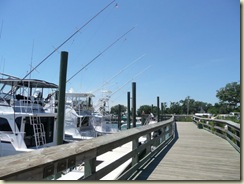 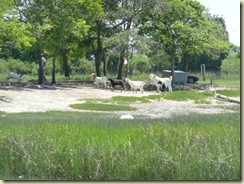 By the way Rob has not shaved for about a week – so he could have passed for one of the local fishermen – What do you think ? 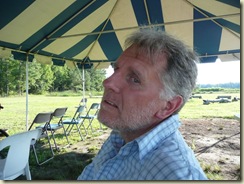 Saturday night was one of those times that you have to pinch yourself to believe your own eyes. When we checked in to this campsite they asked us if we would like to join them Saturday night as they were having live entertainment in the park. So there we were with about 24 other people being treated to a 2 hour performance of the local Elvis impersonator. He was actually very good and we had a really fun time – go figure! 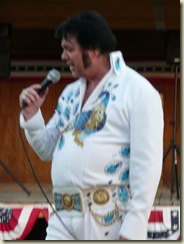 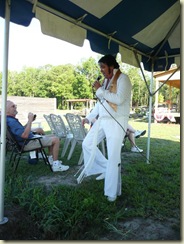 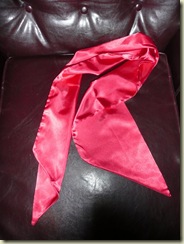 Sunday we stayed around the campsite and just relaxed until about 5 then we drove back to Calabash to try the Seafood Hut which was listed in out travel guide. We had to queue outside in the sun for about 40minutes but everyone in the queue assured us it was worth the wait. It was a no frills place with about a dozen cafe style tables inside. The fried seafood was amazing sooo fresh and certainly worth the wait. We had flounder, scallops, oysters, shrimp and crab all deep fried and served with coleslaw, fries and something called hush puppies which are deep fried corn bread balls. 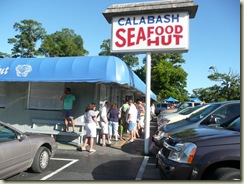 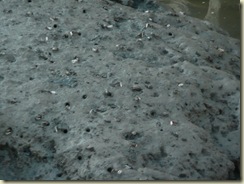 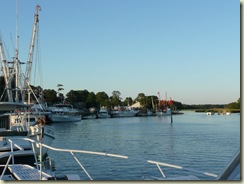 There was a small public field just off the waters edge where a seven piece band was entertaining a large crowd of people for free. The Carolinas know how to celebrate  Independence Day in style 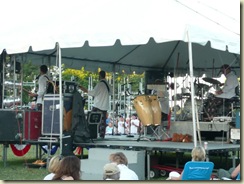 Tomorrow we start the trek back to Pine Bush – we will stop in a town called Petersburg just south of Richmond Virginia Monday night roughly about 250 miles away.