After a nice leisurely breakfast we headed out to explore the local countryside. Everywhere we went we were passing horse drawn buggies as the Amish got on with their daily life. I must say the children all looked very happy with their lot in life. The “Men of the House” were busy working in the fields ahead of their Sunday day of rest 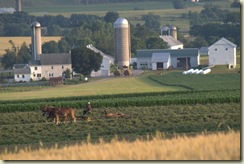 We drove through the towns of Strasbourg, Paradise, Bird in Hand and Intercourse. 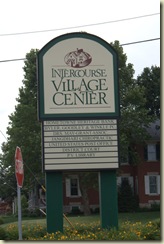 Then arrived back at the campsite for a late lunch. Rob watched the US versus UK football match until the goal was let in by the British goalie and at that point he decided we were off out again. Saturday afternoon is really busy for the locals so the drive was a slow one. We headed up to one of the local farms, Lapps, where they milk their own cows, pasteurize it, then turn it into ice cream. I had chocolate and almond and Rob had raspberry. It was delicious and no of course he was not sharing it with the calf. 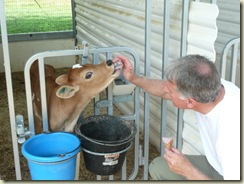 On the way back I stopped at a  house where they sell their own home made quilts, they also had a very nice cookbook that I bought. It contains all their family recipes mixed in with poems and information about the area, a very nice keepsake of the area. We also stopped at a farm that sells hand painted gourds – they are used as birdhouses in this area. 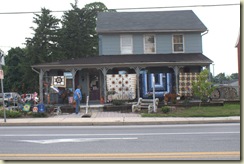 That evening I felt inspired and finished the binding on my latest quilt. Toni, if you read this, the “T’s” are made from the reproduction fabric that we bought when we were out  wandering around the woods. We had spent the day looking for covered bridges in New England and we just stopped to check the map and found we were outside a quilt shop in the middle of nowhere! 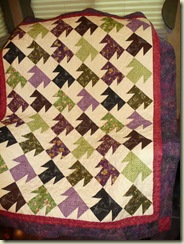 This morning it was very hot so we just took a run down to the town for a quick walk around and then drove around and spotted some covered bridges and old mills. It was also lovely to see the Amish gathered together at various houses – when we went past one house there must have been some 20 plus children all under 10 dressed in their Sunday best and having a great time playing in the garden. 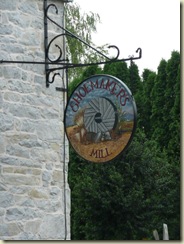 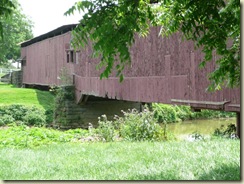 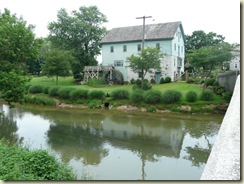 Tomorrow we are going to drive on down to Waynesborough VA. which is in the Shenandoah Valley.