For some time now, we have had a plan to travel this country and to see all the wonders it has to offer. There is so much to see that a lifetime of “normal” vacations could not do it justice. Well these vacations will have to do right now but we are gearing up for that really big adventure. We have been looking for something we could call “home” no matter where we found ourselves, summer or winter. Our search for a 5th wheel travel trailer has reached a conclusion and so I sent the Old Boy on a mission, halfway across the country to drag back our very own “big rig”. He was gone a lot longer than we had planned for and to mark the occasion for this blog only, I’ll let him tell the story ………….

We had been looking at a very specific make of 5th wheel travel trailer for some time. The “Americana” brand specialises in 5th wheels for “full timers”. If you are going to live in it all year around, it has to have a more robust build specification to cope with four seasons and the greater mileage that would be expected. After lots of useful email conversations with the factory, it was clear that, although we were on the right track, we would have to wait a couple more years to save enough to get the one we wanted. Just as we had resigned ourselves to a couple more seasons in the “pop-up” trailer, Lynne spotted a second hand Americana on the web. These are as rare as rocking horse manure and so we decided to investigate. Lots of emails and phone calls later, Lynne packed me a small bag and told me not to come back without our very own Americana”.
Well, it wasn’t quite as simple as that because, although we had just taken delivery of the new Dodge 3500 truck, I still had to order and fit the hitch. For those who are now lost, the 5th wheel hitch fits in the bed of the truck and allows the trailer to connect just like an articulated lorry does. Instead of the trailer weight being right at the back, the 5th wheel arrangement positions the load right over the back axle. This gives a much smoother and safer ride. To complicate matters, our truck has a short bed requiring a special “slider hitch“. I ordered one online and it arrived a few days later on the back of a 40 foot lorry. I had to meet it at the bottom of the drive as there was no way he was getting up to us. The three packages weighed a ton (not literally) and I was beginning to wonder how I would manage the install on my own. It was leap of faith to drill holes in the new truck but it all worked out with the timely assistance of our friend Gil who supplied the extra muscle. Just a Monday wait for the UPS man to bring the brake controller and I was ready to leave. I waited for Lynne to come home from work so we could eat together and then I was off. I didn’t know it at the time but I would not be back home for nearly two weeks.
The “Americana” was 1250 miles away near the small town of Winona in southern Missouri. My very first all American “road trip”. All 2400 miles of it. Just to put it into perspective, that’s over a third of the way to the west coast and back! Google maps gave me two different routes to choose from so I decided to that the hillier route down and save the flatter one for the haul back. The first evening took me around 230 miles out of NY state and well into Pennsylvania. The Super 8 motel had all I needed and I was up and on the road at 6 the next morning. It would be 15 hours, 750 miles, Maryland, West Virginia and most of Kentucky before I would pull in to the next Super 8 in the middle of a thunderstorm and power failure. I really enjoyed that days drive. The hills and valleys of Pennsylvania looks like South Wales on steroids. This gives way to the rolling farmland of Maryland and then the wooded greenery of West Virginia and Kentucky. As the day and the miles rolled on the skies darkened and it was clear that I was travelling into bad weather. I didn’t know, until I saw the night time news, quite how bad it was. I had been watching the developing storm cloud for well over an hour and could see that it was dragging air in from all directions. As I approached Lexington, the sky began to light up and heavy rain and hail started to pound down. The busy four lane highway was at a crawl and the wind had now become fierce. Leaves and small branches were now littering the road. Low hanging cloud tendrils were moving fast across the sky and I began to wonder if I was close to a tornado. People were stopping at the side of the road with hazard lights flashing and the space under Bridges seemed to be a favourite spot. I was in two minds but figured that the locals might know something and pulled over with thunder and lightning directly overhead. In any case I could hardly see. After ten minutes, or so, the wind and rain moved on and traffic started to flow again. Wow! I have never been in such extreme weather. For the next 10 miles, or so, I saw broken trees and passed numerous emergency vehicles on the way to help some poor individual. I arrived that evening, at the next Super 8 on the edge of Kentucky, with more thunder and lightning and a power blackout.
It didn’t matter to me, that there was no power. I just went out like the lights. I was up early and on the road again for the final leg. The GPS had me doing a big loop and I figured, from the old fashioned map, that I could cut straight across and save miles. I worked out just fine and was another reminder that the GPS cannot be followed slavishly. The short cut had me going a very interesting route that took me over two very narrow bridges and through three states in less than ten minutes. Out of Kentucky, over the Ohio River into Illinois, over the Mississippi into Missouri. The last 100 miles to my destination seemed to fly by. 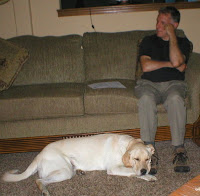 Lee and Linda had given me great directions and I found their place in the forest with no problems. The RV was just as described and, having agreed the sale, I set to work making the few mods needed to match my tow hitch. The original plan was that I would take a couple of days to rest, make the mods, familiarise myself with the unit and then head off back to New York. Well the mods took a little longer than expected and then we found a more serious hitch related problem that needed spare parts and the use of a hack saw! With the weekend disrupting the parts delivery, the Branums found themselves with an unexpected house guest. I was fed and watered very well, made two new doggy friends in Shoben(?) and Oscar and had a chance to look around the area.

The area grew rapidly with Americas rail road and the need for lumber. Thousands worked long hours cutting, chopping and sawing timber into rail road ties and roofing shingles. The lumber industry is still important today but it is a shadow of the boom days. L & L volunteer at a local conservation centre. It helps to educate the young people of southern Missouri to the history of the exploitation of the

forest and the importance of environmental management. The Twin Pines Centre is an excellent facility for school field trips. Amongst the exhibits are a typical Missouri cabin, a single room school house and many reminders of the machinery associated with the lumber trade.

The centre is a fine facility and a lot of hard work goes into it.
The decline of the timber industry has meant that whole communities, that once thrived, have now disappeared. One example is Alley Springs. The only thing left of this once busy village is the restored mill at the edge of the spring which surfaces at this location. It’s

hard to imaging the volume of water that just bubbles up from the ground. This part of the USA is a long way from the sea and so people take advantage of the the rivers for recreation. At Rocky falls the river cascades down a natural water flume and into a large bathing pool. Families were out enjoying the sunshine just like being at the beach.
As part of their love of the natural world, Lee and Linda help to rescue animals that have been abandoned or lost their mother. One of the highlights of my stay was the arrival of some possums. They were so tiny that they hadn’t yet learned how to pee (I di

dn’t realise you had to learn to do th 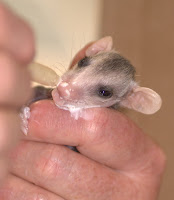 at ….. but then I am male!).
So after being well looked after for over a week, learning all about bargain tractor on Ebay and Ham Radio, the truck parts came and I was ready roll. Lee had bravely offered to give me a trailer hauling lesson so it was off to the local truck stop to gas up and practice reversing the 40ft monster. I certainly knew it was hanging off the back but, with the 5th wheel arrangement, everything was

smooth and predictable. And so, with Lee’s wise words rattling around my head, I hit the road for the long journey back. I knew that my first major challenge were those two narrow river bridges. I had around 100 miles to think about them but by the time I got there I figured that if semis (artics) could pass then I was fine. With that hurdle out of the way, the rest of the trip back was pretty uneventful barring a couple of tyre and suspension concerns. Rest stops and refuelling (lots) have to be well considered with a 40ft trailer and low bridges must be avoided. The most troublesome part came right at the end of the journey when I over confidently thought I would reverse into our driveway …….. no way! Having held traffic in both directions for way too long I had to give up and drive in. Turning around in the garden ……… well perhaps I will leave that for another blog.