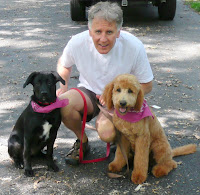 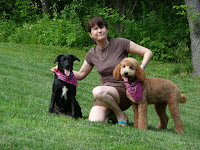 So who amongst you can remember Rob declaring emphatically that we were never having dogs and who on earth needed a big US style truck………………. Well……………. as you already know we have 2 dogs. Although I have to admit neither of us realised how fast and how big Cagney would grow! They are both doing really well and calming down a little, Cagney was spayed 2 weeks ago . Cagney was completely calm about the whole experience, she loves going to the Vets. Our biggest issue was Lacey, who was heartbroken that we took her sister away for the day. She was so glad to see her back and was very gentle with her for the first few days. They are back to their normal rough and tumble selves now and other than a shaved belly there have been no after effects

And now that truck!, as you can see it is truly huge. Thank goodness it has a step so that I can actually get in. It has 6.7 litre turbo charged Cummins Diesel engine, four radiators, two batteries leather seats and GPS. All we need now is the fifth wheel to tow behind it. More about that very soon …….

I decided to get an image update and I now have a very short bob cut, best thing I have done in a long time. So much easier to manage with all of this humid weather. Which brings me on to my next topic. After the wettest June on record (26 days of rain) we are sad to report that July is just the same — we have thunderstorms most days and when I say thunderstorms I mean really powerful ones that shake the house and light up the sky. We will probably have webbed feet by the end of the Summer. Boy it is making the plants grow though, We have loads of flowers and shrubs growing very well as well as some tomatoes, peppers and salad leaves. Rob is also having to cut the grass every few days. This year we have very few Japanese beetles but loads of mosquitoes and midges 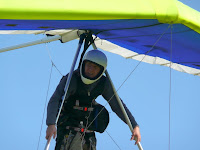 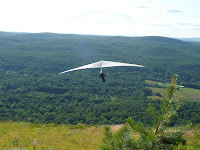 Despite all of this bad weather, Rob was able to take off from the Ellenville launch site and had about 2 hours of flying in the local area. He also managed 3 hours of boy talk with the local hang gliders so he was very happy although tired and aching when he came home. 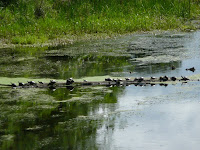 When we are not actually getting rained on, the weather is sunny and hot and as you can see the local turtles were making the most of it and getting a few rays – there must have been about 30 of them. We are doing are best not to get over run with Field mice ( now about 7 less in the world) and squirrels ( about 10 less in the world) Ah the joys of rural living. We really do feel part of the community here and are enjoying our life as much as we can. I even made it into the County magazine, I was interviewed and asked why I chose Pine Bush and what it was I liked about the
area — I knew I would be famous at some point!

After we made them promise not to pick on us Brits and assured them we would not be turning up dressed as red coats, We were invited to celebrate July 4Th with Lisa and her family it was a really lovely day and we were able to relax eat good food and Rob found some kindred spirits to explain his views on the medical system, local politics and anything else that he could fit in. I was able to use my super duper machine to make some very nice hand towels to take as gifts.