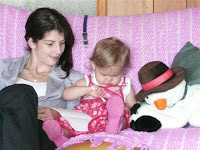 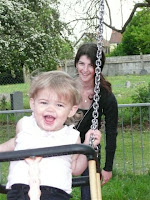 I was lucky enough to be sent to the UK for a few days with work at the beginning of June and managed to spend time with Mum, Mike, Hazel and of course Sarah and Alana.

Sarah is doing really well with work and has signed up for additional education – life is a little easier for her now she has a her car and she is hoping for news about getting a house out in the countryside by Sonning. Alana is of course a total poppet, she looks so like Sarah did at that age, just as happy and independent too. We had some professional photos’s of the three of us taken so that we can capture the moment. I really can’t wait till I get them. 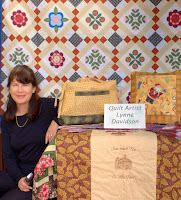 For those of you that don’t know, I have been very busy supporting the local economy by attending (and spending) time and money at the local quilting shop. I have found it very relaxing and a great way to meet people as well. There was a small article about me in the local magazine this month, it was basically about the town itself but they asked me why I enjoyed living in Pine Bush so much so I decided to give the shop a good mention and get them some advertising. Last Saturday we had a town wide “meet the local artists” and the quilt shop had a stand set outside and I was one of the people that exhibited some of my quilts and other crafts. Bit of a change from the day job don’t you think ?

We’ve been trying to get the girls out walking as much as possible. They have lots of energy to burn off. We took the short ride to Sam’s Point. It’s the high ground on top of the ‘Gunks behind the house. We started out early to avoid the heat of the day and arrived before the car park was open. We also missed the crowds. The girls are good off the leash and wont run off. They get a bit excited if we meet 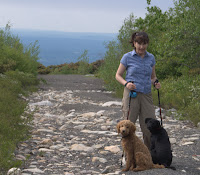 other people and go really crazy when the meet another dog to play with. Ah well, they are puppies and everything is still so new. From the car we strolled up the gravel roadway to the high ground, passed the transmitter tower, looped around the lake and down again via the cliff look out.
On the way up we passed a number of

abandoned and derelict workers cottages. There must be about 10 – 15 sites that were once lived in. None are habitable and are in various states of decay with cookers, fridges and other items scattered. They were originally used by the seasonal huckleberry pickers. But it seems that is no longer

viable …… although the berries are still here to be picked.
The trails are flanked on each side by dwarf pine trees. Very special … apparently. Quite pretty, anyway.
The girls really came alive at Lake Maratanza. They are just coming to terms with the idea that their paws go straight through what they can see. Every

splash is a trigger for excitement. They are still a bit unsure if they don’t feel the bottom and run away to safety. A family of ducks made a rapid escape out of harms way. We decided that we would go back another day with a picnic.
The trail back down took us past the cliff top looking out south across our valley and the Hudson valley way beyond. We sat there for quite a while watching the soaring birds. They came almost close enough to touch (until I got the camera out).
We had a lovely walk and the girls were pooped by the time we got back to the car. They were soundo when we reached home. The garden had a surprise for us. In the time we had been away, the Iris’ had bloomed. A lovely welcome home.
More info on Sams Point http://www.nature.org/popups/misc/art22206.html 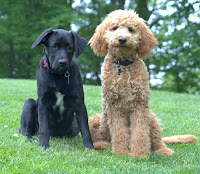 Cagney and Lacey are growing like topsy. Lacey is still the heavier but Cagney is growing into those long legs and now stands tall. Their rough house battles have become a much more even affair. Sometimes I worry that they are being too rough but Rob says that they are just playing. I suppose he’s right but it doesn’t seem very lady like. We have had a run of wet weather in the last few weeks. It doesn’t take long for Cagney to get messed up!

Meanwhile, in the garden, things have been doing what they natually do ……. grow! The iris gave us a nice surprise on the day of our Sams Point walk. When we left in the morning they were all wrapped tight and on our return they had all bloomed. It was a lovely welcome home. I’ve also had Rob out in the back putting in a whole bunch of plants around the patio and hot tub. It still needs work but is getting there.
Did I mention the wet weather. Well, when it rains here, it really

rains. Thunder, lightning and 3/4 inch hail did its best to destroy the tomatoe plants and wash out the driveway. At least it will keep the old boy busy.
Now that we have the dogs we really need to be self sufficient is we want to go off for the weekend. It’s a pain trying to find pet friendly B&Bs. Long term we intend to get a 5th wheel trailer but for the next year or so we have bought a pop-up trailer tent. 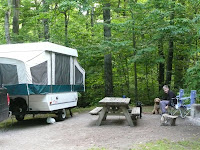 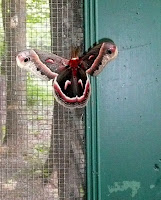 There is plenty of room for a short break away and makes for a stress free trip. For our first trip we went to a woodland site in the Catskills. We chose it, not only because it’s a lovely place, but it’s only an hour away. That meant we could get back it it was a complete disaster. I’m glad to say that everything went very well. Even the girls enjoyed themselves. The camp site was well organised and maintained. We had a pitch 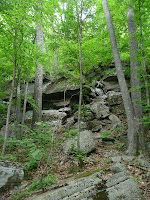 close to the river but within easy reach of the toilet block …. most important! Taking up residence at the toilet block was the biggest moth I’ve ever seen.
With the camp site set in a gorge, all the walks had a major up hill component (ok, it was down hill on the way back … but still) and it was tough going. Even the girls complained after a while. One benefit though was that the tree cover extended all the way to the top of the hills so we were at least walking in the shade. It was very peaceful and we met very few people in the woods. At least we didn’t meet any bears or snakes. The warning notices were everywhere. All in all we 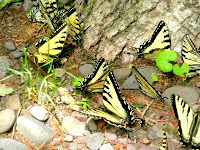 had a very good weekend. The pop-up is just right for a short break and the girls took to it well. We are all looking forward to our next trip.
While we were in the camp site we were told about a bunch of butterflies to go look at. Apparently they are attracted by human urine (eek).