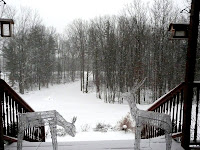 It’s a new year and the middle of the long winter. We have snow on the ground, bitterly cold days and even colder nights. At least the days are getting longer again. For the last month, only Rob’s truck, with it’s 4×4 and snow tires, has been able to make it up the driveway. I’ve enjoyed driving it to work with 2ft of snow in the back, but it’s not quite as flash as my Acura.

We have been watching the BBC reports from the UK and notice that it’s been snowing there too. I suppose it’s a bit different here. After all, they expect it and are ready for it. There are almost as many vehicles with snow plows attached as not. Not much seems to stop them, although the schools close at the hint of snow. Even our local UPS delivery man hiked across the snow filled gardens from our neighbour’s property to bring us a package …. above and beyond!

We have been trying to make the most of the good days. New Year’s Day was a lovely bright day so we went up the mountain for a hike. I took my snow shoes to practice.

It was pretty cold but dry and bright. We took a packed lunch which included a flask of hot tea. It was great to get out in the fresh air and see the mountain in the snow and ice. In one photo you can see the “look out” that we climbed up too in the summer. 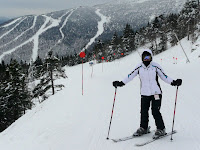 Of course, one really good thing about lots of snow is that there is skiing to be done. I actually managed to take a week off and so we packed the truck and returned to Stowe (Vermont) for a few days. We had so much fun with great snow and reasonable weather. It was very cold but the resort has a good (warm) restaurant right at the lift base for regular thawing sessions. 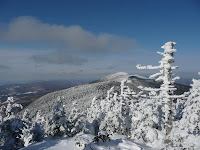 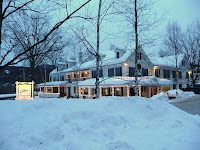 This year we stayed in Stowe village (there is a needlecraft shop) at the Stowe Inn. We were in the older (budget) motel part although it was all we needed. Breakfast was continental style with DIY waffles available.
The bar/restaurant is great if you can’t face driving out again after a long day skiing. We had no fixed plan and were going day by day depending on the weather forecasts. 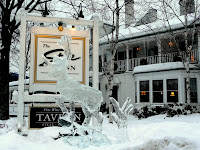 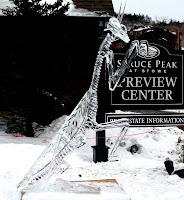 There are several well known ski areas in Vermont. Stowe and Killington are probable the biggest and we were on our way to Killington but passed a place called Sugar Mountain and thought we’d give it a try. How lucky were we! It was a promotion day and the lift tickets were half price. We had another good day in the snow. We never did get to Killington as the forecast for the next few days got bad. It gives us somewhere to explore next time. We are now looking forward the skiing in Canada with Kat, Catlin and Ian ….. roll on March.

It’s been quite quiet on the the animal front. We are beginning to see the deer again as the snow starts to thaw. Rob has been battling with the squirrels (he’s a laugh). They keep stealing the bird food and every five minutes he’s chasing them off. We did have one new visitor. Rob just had time to snap an Opossum scuttling through the back garden. It didn’t hang around long.

I suppose all the recent exercise has been keeping the old boy from vegetating. Must be working. Look what I woke up to the other morning.