I’m pleased to say that everything is pretty much back to normal after the “landscaping” accident. I’ve got my car back as good as new and we have a cheque in the bank for Robs. (although I’m not sure that’s the best place for money these days) We haven’t found a replacement yet but hope to pick up a bargain soon. The rental company provided a couple of different trucks for Rob to try. They were a breeze to drive even if they were the size of a small house. Oh well I’m sure he’ll find something soon. ……. then I won’t have to keep adjusting the seat and mirrors on mine!

One of North America’s big tourist attractions is the Autumn (Fall as they say here) colours. It’s usually associated with New England but it’s just as spectacular where we are on the Southern edge of the Catskills. What was really interesting was driving north into Canada and seeing the countryside changing from green to red. By the time I returned at the end of the week, it had spread all the way home. 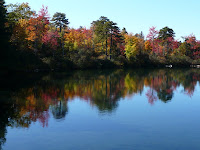 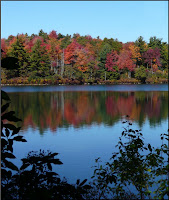 We’ve had glorious weather with temperatures into the low 70’s (all changed now though). We took advantage of the blue skies to go for a bike ride in our local state park. Quite a few other New Yorkers had the same idea and we had to join the line to get parked. It wasn’t bad once we got away from the car park ……. it’s a big place.

We did something over 15 miles around the lakes of Miniwaska and Awosting. There were some difficult uphill sections that we walked but the paths are well maintained and ideal for mountain bikes. One of the rules for bike riders is the use of a crash hat. Of course, “grumpy old granddad” objects to wearing a crash hat on a push bike …… “I’ve been riding a bike for 50 years with out one” …….. “They look silly” ……. etc. Anyway, after the third time of being told off by park rangers, he has decided that it’s easier to wear one. It doesn’t make sense to me. The “buffy old bloke” has no problem using a helmet when he’s flying or when riding a motorbike. It’s funny really, he’s just becoming Victor Meldrew.

We’ve just got back from a short trip to Las Vegas. The company holds a convention there for customers and though it would be nice to see some of the surrounding country this time. The flight in passed over some spectacular mountain/desert scenery and over the Hoover Dam and it looked too good to miss. Our stay was right in the heart of the strip at the Caesars Palace Hotel. Las Vegas is like Blackpool on steroids or perhaps like Disney World for big kids. I’m not sure that Rob was really comfortable in the town but it was a fun place to be working for the week.

We hooked up with our friends Paul and Robyn to make the most of it. It was great to catch up and enjoy dinner(s), the Jersey Boys (amazing show) and a road trip to the Hoover Dam. The Dam Tour (endless fun) started and ended with a top down ride along the strip in the “American icon” Ford Mustang………. well that’s what Rob said. I just kept thinking CSI! It’s only about 20 miles to the dam but wow, what a change in scenery. That mountain come desert look is something I remember from old westerns.

The dam is a remarkable structure and is a national monument. It gets a lot of visitors but we were pleased to find that it’s all well organised and the people seem very proud of the whole thing. We had a lot of fun with the staff and the “Dam Tour” …… how many times must they hear that! We had a top quality guided tour of the whole place including a trip into the heart of the dam and the turbine hall. At one point we were able to walk along a 6ft tall tube to see the view from a grating half way down the dam wall …………. and this is where Bob (buffy old bloke) excelled himself. What is he like! Well I’ll tell you. If he’s not being a grumpy old man, he’s reverting to child hood. Just imagine what an eight year old boy would do if he’s asked to go down a long 6ft diameter tube like tunnel ………….. yes that’s it …… think skateboard pipe. He only starts running up the walls…….. big kid. And yes it all ended in tears. Not being a kid any more, he lost his footing and landed on his elbow ……. chaos ensued with calls from the deep to alert medical staff at the surface. 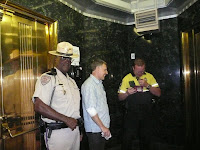 Still, the tour went ahead and we were met at the surface by a bemused first aider …….. what more can I say! We continued on our way back to Vegas via lunch beside lake Mead. The fish were taking advantage of the no fishing rule and looking for offerings.

Apart from the weekend, I actually had to work so Rob looked after himself and walked the strip form one end to the other. Thank you to our friend Jayne who took time out and join Rob for lunch. I’ll try to meet up next time.

Getting back home after a week away was a bit of a shock. Leaves covered the garden and the first night went below freezing. It’s been time for logs on the fire and wrap up. I’m suddenly realising that I’ve been over here very nearly a whole year. So while I caught up with being away from the office, Rob busied himself in the garden in an attempt to keep on top of the falling leaves. They are everywhere. Rob was up a ladder clearing the gutters yesterday.
The wild life is also getting ready for winter. The squirrels are busy burying nuts all over the place and the deer are coming around more often again. One surprise though is that the Mantis is still praying in the fountain grass ……. perhaps he’s praying for warmer weather.