I’ve been having a quiet Sunday with my quilting and generally relaxing after another busy week. Rob is pottering about in a wet garden after the heavy rainfall last night. We didn’t sleep enough last night following the evening excitement, but I’ll get back to that later.

My lovely little friend, Toni, came to see us last weekend. She flew in on Thursday and took the train ride up the Hudson. Rob did his taxi bit from Beacon station and then turned around again to come and collect me from Newark airport. After a short nights sleep we had a noisy pancake breakfast reunion. It was so good to see her again and be able to get some girly time together. I think the buffy old bloke was pleased that I had someone else to go shopping with.

The weather Saturday might have been better but we didn’t let it stop us. We took a tour through the back roads into the Catskills. The mist and clouds were hanging low over the forested mountains and we managed to get a lunch break just as the heavens opened again. The traditional Diner we stopped at was run by a Greek lady who instantly recognised our ascents. She had lived in southern England for some years. There were some interesting photos on the walls. Pictures of locally spotted bears (not bears with spots!), hunters with their “kill” and a whole bunch of the cast from a 2006 film “the night listener”, staring Robin Wiliams. The Diner had been used as a location. Our route home took us via the quilt shop in Woodstock and the college town of New Paltz.

Sunday brought sunshine and another pancake breakfast…….. Rob insisted! As Toni was due to fly back that evening, we stayed close to home and took a walk in the grounds of Mohonk Mountain House. I was in charge this time and we avoided the scramble and the Lemon Squeeze …. much to Toni’s relief. It was a beautiful day with blue skys

and sunshine. The temperature was in the mid 70’s (23c ish). As an added bonus Toni and I had the distraction of seeing lots of tri-athletes completing their event with a swim across the lake (last of 3) and a run to the skytop lookout. The winner was 7 mins ahead. Anyway, following that excitement we needed a sit down so 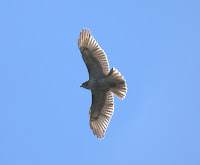 had lunch at the Picnic Lodge ……. very nice too! Rob wouldn’t let me come to the station to drop off Toni. He said that we didn’t have enough tissues. It was sad to say goodbye as the next time I see her it will be at her new home in New Zealand.
Bird watch continues. Rob has been trying to get some close up shots of the humming bird (the ones that he said would never live here) I selected a couple of the MANY that he has taken. I’m pleased that digital photography was invented …….. we’d be keeping Kodak in business otherwise. I’m not sure what the other bird is but there seem to be lots circling around here.

So now to the excitement I mentioned at the beginning. The landscaping work is almost finished at the back of the house now. We’ve added a stone patio, sorted the drainage issues and built planting beds that include the big rocks that were dug out, on the way. 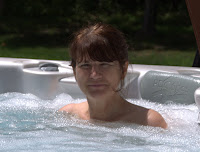 It’s relaxing to sit in the hot tub and imagine what it’s going to look like next spring. Ok, you have to look beyond the muddy patches and the straw protecting the grass seed but it’s really taking shape now. We’ve had a couple of big downpours and the run-off no longer streams across the drive way.

Talking about driveways; ours is totally empty since last night. We are carless. It all happened with a big bang. Resulting in a pile of mangled vehicles.

Tony (the landscaper) was loading his tractor onto it’s trailer, attached to his pickup truck, at the top of the drive. All of a sudden the whole train started rolling down the hill ….. with Tony still sat in the tractor cab. The pickup, trailer and tractor slewed across the grass and hit both our cars which we had parked away from the house for safety!

Rob’s is a write off and mine is extensively damaged. Tony was, thankfully, unhurt. It’s amazing that the tractor didn’t topple off the trailer as it wasn’t yet strapped down. Still, it’s only metal and not a body that we were clearing up. The next couple of hours had the driveway fill with police patrol cars and tow trucks. We couldn’t sleep very well last night and Tony was here first thing to clean up the dive and lawn. This will keep the insurance companies busy for a little while.