The whole place went mad for Halloween. Houses and gardens were all decked out with cobwebs, skeletons, pumpkin lanterns and other spooky stuff. We even had an area of our offices decked out and all the kids were invited in for a “trick or treat” party. I’m not sure who had more fun. That night, the traffic through Pine Bush was at a crawl with dozens of dressed up children (and a few scary adults) filling the streets for a haunted house event. Lights, music and hot dogs. It was the last day of the year for the ice cream parlour and they were exchanging candy for ice cream. I really enjoyed the spectacle. Bob (see previous blog) wasn’t so enthusiastic but did brighten up at the sight of one or two of the older girls costumes.

Well after the excitement of the Vegas visit, it’s been relaxing to spend some time on home turf. I did have one multi-day trip on the east coast with the last stop in Boston. Business was wrapped up sooner than expected so, rather that kick my heals at the airport, I rented a car and drove back. I was able to get home at a decent hour and there was lots of autumn colour to be seen on the way.

Autumn is giving Rob plenty of work in the garden. The trees have provided a lovely display in the last weeks but have now shed all those beautiful leaves. Until recently, Rob has been able to mulch them when mowing. This week, though, there have been just too many for the mower to handle. Well that’s what the old boy said when he convinced me that we (he) needed a leaf blower. What is it with boys and toys? He’s been out there for two whole days blowing piles of leaves around the lawn. He said that he needed to finish it before the snow came. He only just managed it. There was a bright white carpet to greet us this morning. The locals say it’s going to be a harsh winter and that we got off lightly last year. 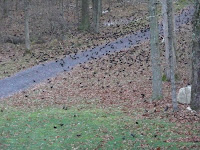 Mother nature seems to be getting ready. Our plants have lost their leaves and died back. Only the box wood has any colour but the ornamental grass is still magnificent, even as it fades out. The animals know something is happening as well. The deer are coming around more often, the squirrels are back and the birds have become very active on the feeding front. The other day we looked out on the lawn to see it covered by a mass of black birds. There couldn’t have been an insect left!

A week or so ago, I left Rob pottering in the garden (fighting chipmunks) and joined the ladies at the “Quilters Attic” for a one day course. It was just so relaxing. I learned some new techniques and ideas for Christmas. It’s generally been busy on that front!

Talking about relaxing……. we’ve both decided that the hot tub was our best idea this year. Well, Rob insists it was his idea but we know don’t we. We climb in after putting in some time on the gym machines. Mind you, it’s getting a little exciting on the trip too and from. The evening temperatures have been hovering around freezing for the last week.

We’ve been remarkably social in the last few weeks. We had a very pleasant meal at a local restaurant with a couple who live nearby but even further into the woods (they’ve had bear in the garden!!). Coming from the west coast, they are just about as far away from home as we are. They told us about a local artist that works with glass. The following weekend we went with them to visit the studio. It was a kind of open day stoke sales opportunity. They were demonstrating glass blowing and showing a variety of pieces from vases to stained glass panels. The studio is an annexe of the house set in the woods. Rob was very impressed by the glass blowing demo and the house but I think the event was a little bit “artsy” for his taste. Amazingly, neither of us took a camera. Fortunately our friends remembered.

There has been a lot of activity in the field to the left of our driveway. It soon became clear that we would have a new neighbour. The basement was quickly formed and concrete poured. Then, incredibly, the whole single story house, complete with plumbing, electrics, a fitted bathroom , a fitted kitchen and all the appliances arrived on two huge trailers. This was followed two days later by a giant crane which flew the two sections onto the waiting foundation. The building was completely watertight by the end of the day. Good job too as it bucketed down for the next two days. They’ll be in for Christmas.

So it’s been another busy month …….. in a relaxing sort of way. Oh, I nearly forgot. Rob is back on the road again …….. more boys toys. Apparently it’s got a 4.7 V thingy. More importantly, it can seat six. That saves mine on the trips to the diy centre and will make things easier when we have visitors!