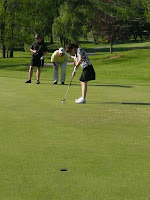 The thing I’ve been most worried about, for the last month or so, has been an invite to a corporate golf event. I don’t often get invited to things where I am the customer so I like to take any opportunity I can. The only snag with this event was that I was expected to play!

Eekk! It’s been a long time since I last played properly so I had to take it seriously. Luckily there is a driving range in the town (Pine Bush – more like a village really) and a resident pro to give some lessons. Anyway, after three or four sessions and having Rob caddy my clubs around a couple of courses, I was ready for the big event. 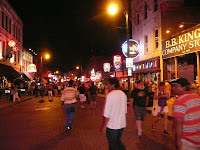 It was held near Memphis in conjunction with a round of the FedEx Cup so I also got to see some of the worlds top players in action. Our host had organised a team event (shot gun scramble). 36 golf carts all taking off together in 96f heat. I was a bit nervous as I didn’t want to let the team down. It turned out great with all my practice paying off. My ball saved the day quite a few times. We didn’t win, but I was really pleased with the way my game is going. 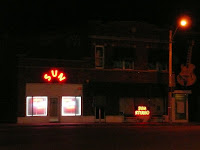 It wasn’t all hard work though. We were fed and entertained really well. Giant buffets, an Ice Bar and lots of FedEx logo golf goodies. We even got treated to an evening on Beale Street in Memphis with all it’s live music and street entertainment. Work can be tough sometimes!

Rob told me to look out for this place. I think he said it had something to do with Elvis Costello …. or was it Elvis Presley?

Health care in the USA is very different to the UK. You have to pay for it. That is, you pay an insurance company and they pay the bills. Don’t get Rob started on the subject, he’ll end up with a heart attack. I guess I’m one of the lucky ones as my insurance is paid by the company. I had to go to the doctor because I have been getting a bit of sciatica after a long drive (in the car …. not golf). They were very nice but once you are on the books as a new patient (guinea pig) they want to find out if you are healthy. Or as Rob puts it “how much money they are going to be able to extract from your insurance”. I’ve been examined and tested for everything you can think of. I’ve been prodded, probed and poked in pretty much every crevice.

The final examination was a screen for colon cancer complete with rubber gloves and endoscope. I had to fast for 24hrs prior too. I get grouchy if I haven’t eaten and it’s not made any better by the mixture you have to take the night before. Rob dropped me off at the clinic at 6.30 in the morning with instructions to return in 2 hrs. I was wheeled in and the nurse connected me to every conceivable monitor device. She gave me something and said that I would feel a little drowsy. The next thing I knew I was looking at photos of pink inner bits and being shuffled along to the reception to meet Rob. I’m pleased to say that I’m fit and well ……. except for the sciatica which they can’t do much for. I have to sleep with a pillow between my knees????

We have had two new critters in the garden. One big and one small. Both Turtles, the big one was 10″ across the shell and the small one about 3″. The heavy rain must have persuaded them to travel. The big one was crossing our drive in the woods and the little one was wandering across the back.

The front garden is starting to look good now that the grass is growing back. Rob is remembering to water the hanging baskets and it’s a real treat to come up the drive after a day at work. We are nearly ready for summer visitors.