Things started off pretty normal, nice blue skies, chores done and then…. 9.30 a power outage …. this was one of the reasons we escaped Pine Bush was to get away from these. 2 major differences though, it only lasted for 20 mins instead of 4 days and even better AT & T have the good sense to install battery back up in their systems and also not pull their power from the same supply to the house. So we at least had continuous internet.

Not to be out done, two of the boy pacas decided to spit at each other, now with Alpacas this is not just a little mouth spit. They actually bring up some disgusting smelly and as you can see from the picture nasty tasting stuff from their stomach. The funny thing is that even they don’t like the taste and smell so the both of them were wondering around with their bottom jaw hanging open waiting for the smell to go away. I guess it will be a while before they do that again… Boys ! 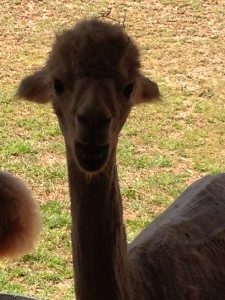