We have often thought that we just don’t get into NYC very often. Given that we are only 80 miles from one of the great cities of the World, we should do it every now and then.

So off we went. Just to make the trip a little adventure we took a different train route to the one that takes us down the Hudson river. We took the “Port Jervis” line, over the Moodner Viaduct, through New Jersey and under the Hudson River into Penn Station. It’s a slow line but a very pleasant journey.

First stop was the B&H camera superstore. I could spend hours there just looking. Lynne was interested in a bag for her new Sony but the check out line just seemed too long so she gently guided me to the exit.

A new section of the High Line Park has recently opened so, as it was a lovely day, we went off to explore. The park has been constructed along a disused section of elevated rail line. Starting at 30th street and going on down to 14th, you get such a unique view of the city . We highly recommend it. 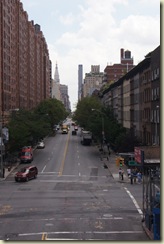 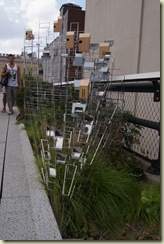 After a well deserved lunch we went off to explore the garment district and find Mood Fabrics of Project Runway fame. Given that I have no interest in the series it’s odd that it was me that spotted Mondo, runner up from last year, waiting at the counter, fabric in hand. The place is an Aladdin’s Cave for anyone with a creative stitching bent ……. I dutifully followed along at a distance. 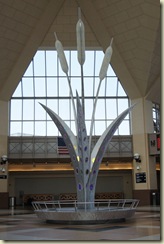 We strolled across town and gradually made our way back to Penn Station for the trip back to the sticks. We were quickly away on the first leg to Secaucus Junction where we discovered that we had over an hour to wait for the next train to Middletown (NY). Still, the modern waiting plaza was cool and had seats. The time seemed to pass quickly …. maybe it was the company? It was a fine day out in the big city and we will do it again. Not via that line for a while as hurricane Irene has washed out the tracks in several places.

And that brings me neatly on to the wet and windy end to the summer. Hurricane season is always well reported here but doesn’t often make as big an impression as Irene. The signs were there and people were being warned to make preparations well in advance. Low lying areas of New Jersey and New York were evacuated for the predicted storm surge and flooding. As it turned out, the main destruction came from the very heavy inland rainfall and subsequent flooding as water took any route down to overflowing rivers. Some towns had 4ft of water running down the main street. There are some crazy scenes on You Tube. 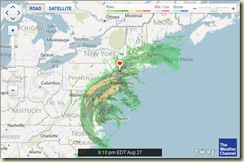 The weather radar pictures looked ominous and it was raining hard as we went to bed that night. Everything had been put away or tied down. We knew it would be windy but the worst was expected on the coast, 80 miles away.

We woke up at around 3am and it was raining hard but blowing harder. All the trees were trashing around, the electricity was already out and all we could do was wait for the sun to come up and the wind to calm down. When it did, we were pleased to see that there were no major trees down and apart for some very minor water in the basement, we were unscathed. I got the small generator running and we had the fridge, freezer and some lights going. Our main issue was the lack of 220v for the well pump so there was no running water although we had filled up the bath and stocked up on bottled water. We had radio but no telephone, internet or cable tv. By lunchtime we were beginning to understand how lucky we were.

We took a trip out to see how the local area had been affected and to see if we could gauge how long the power was likely to be out. We soon started to see trees down and roads flooded. The river through town was raging but runs significantly lower in the valley so was not an issue there. We travelled to a number of other bridges and road crossings to see the scale of the run off. There was a lot of water!

The fun started on the homeward loop. Every way we turned there was a flooded road, a tree down or power cable across the street. We were all over the place before we reached home. We eventually got power back by Wednesday.

On a much lighter note. We had a great evening out this last Saturday. We went out with friends to Brian’s Back Yard BBQ for a meal and blues music. So good!

Cute critters in the collection have mainly been deer, hummingbirds and the odd snake. I also saw a skunk scurry through the trees.