It all started on Thursday 24Th February, it started to snow and snow…… and snow. By Friday morning we woke up to 18inches of snow and no electricity. Which in our house means no water, no heat, no flush in the bathroom, no phone, no Internet etc. We thought it was an adventure, well for the first 6 hours, it started to get boring after that.
Rob lit the fire and we were able to burn logs to keep warm and we had the generator from the RV to keep at least one light running and the freezer so that we did not lose all the food. We contacted the electric company and they had no idea when the power would come back on. To cut a long story short – it kept snowing till Sunday ( up to 4feet in some areas) the power came back on late Saturday night then the cable company service fell over on Sunday so even with power still no TV Internet or phone – oh the joys of country living.

The following weekend we had mild weather and 3 days of rain – floods everywhere except in our area. Thank goodness for a high plot. Then last week we had beautiful sunshine and blue skies for the whole week and the temperature went up to the low 70’s. As I said in the heading all 3 seasons already — all we are missing is Autumn. For those of you that don’t know already, I resigned from my job in February. I was really fed up with the politics and all that comes with a

company that is running in cliques. At the moment I am considering freelancing – I have already worked a few days up in the city which was a lot of fun. I just need to see how it goes and consider my options. The upside of this is, I have at last finished a number of my sewing and quilting projects as you can see from the pictures. I have also been busy making cushion covers and other quick craft projects. 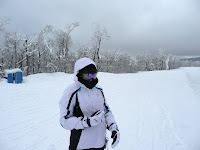 A week after the snow we drove up to the Bellayre ski resort, it only took us just over the hour and we were met with the most fabulous conditions perfect snow, very little wind and not too cold. We were able to ski every black diamond run they had. It was a great day that was only made better by the fact that the lift ticket was only 20$ 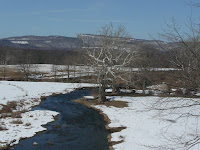 On the 8th March we were going to go hiking in the reserves but they were still closed to hikers because of the volume of snow left ( they had about 4ft ) so we hiked the rail trail instead – the dogs enjoyed it as much as we did. We took a picnic and sat on the bench looking up to the mountains very nice.

19th March we went to see the Awosting falls – it was funny to be hiking in snow while wearing short sleeved t-shirts. The Falls were great — with all the snow and the rain the river was at full tilt and the falls were fast and furious. We carried on around the trails with a few missed turns ( hard to see the trails in the snow). We did about 4.5 miles and decided to go a bit further afield next time.

It was such a beautiful day over New York State. As you can see, the lake is only just begining to loose its crust of ice. In a few weeks all the white stuff will have dissapeared and the park will start to fill with people travelling out from the city to see it – if the govenor doesn’t close it as he has threatened.

On the Sunday we hiked Mount Taurus – It is over the other side of the Hudson from us, between Beacon (where the train comes in) and Cold Spring. It was a hard steep hike to the top with some great views up and down the river. We had a picnic at the top again and we also realised the dogs must be part mountain goat because they just bounded up and over all the rocks. By the time we got back to the car we had done about 6 miles

25th March over to Spring Farm at last the snow has melted although that did mean that the fields were quite soggy. We walked over to table rock mountains and then up to Bonticou Crag, our pet mountain goats did a great job although we all balked at the almost vertical drop from the top of the crag and elected for the longer path back down. Another 5.5 miles, the dogs really slept well after all that exercise

and so did we. This was a good walk for spotting raptors. We surprised a gaggle of 6 or 7 Golden Eagles sunning themselves on the rocks. It surprised us as well and Rob didn’t have time to get the canera out before they were all gone. We did get to see a couple of Turkey Buzzards though – just not as pretty.