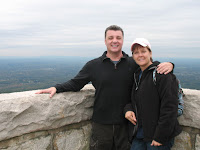 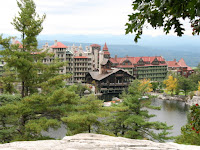 It’s been a busy month for visitors. We were so pleased that Robyn managed to drag Paul away from his laptop to relax for a long weekend. 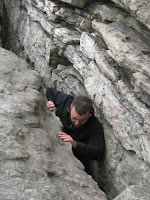 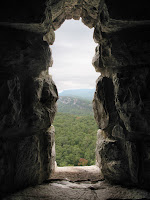 We knew it would be fun when the advance consignment of wine arrived! We spent the whole weekend walking, eating and drinking. I wanted to show them the Mohonk Mountain House and Paul decided that he wanted to to do the “Lemon Squeeze” with Rob while Robyn and I took the “easy” route to the Skytop look out. The boys enjoyed the climb while Robyn and I had chance to chat. At the top is a look out tower that gives a great photo point. The area looks so good at this time of year with views out over the Catskills and the Hudson Valley. The skies could have been a little clearer but at least it wasn’t raining. Still, it was a good chance for Robyn to get arty with the camera. 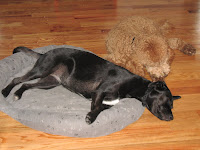 Meanwhile the girls were a little disappointed that they had to stay at home. They went crazy (as usual) when we arrived home but soon got back to napping …. it’s a dogs life!

Pine Bush is blessed with quite a few good eateries but we discovered another one! Culinary Creations is mostly a cafe and cake shop but opens up as a restaurant at the weekends. The owners were trained at the Culinary Institute and we are so lucky to have them in this small town. That was the only posh nosh of the weekend although we did take in bar food in New Paltz, Panera Bread in Newburgh and Friendly’s for ice cream in Poughkeepsie (Robyn’s special request). 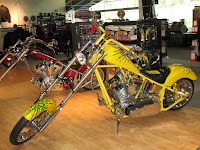 Of course, no visitors could go away without a trip to Orange County Choppers. Their big shiny new “World HQ” is packed with examples of their handy work and also new Harleys and Ducatis. Mainly one for the boys! 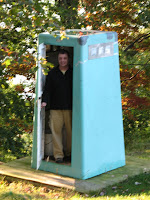 We couldn’t leave the dogs out so we did spend a fair bit of time walking them but that also gave us a chance to show off the mountain in our back garden. We walked up to “Sam’s Point” (photos in earlier blogs) and also took a wander up to the hang gliding take off. There was no flying on the day but Paul was impressed by the “facilities”. The time just flew by and we can’t wait to take our (now annual) Thanks Giving trip to Atlanta. We are taking Cagney and Lacey this time so there will be lots of excitement when they meet Blake, Missy, Allie and the two mutts Parker and Sarah.

With barely time to draw our breath, Sister Kat and Niece Catlin arrived at JFK. Rob collected them and after a middle of the night hello they were able to catch up on some sleep. I still had work to do on the Friday so Rob looked after the girls (all four of them) with a long walk around the mountain. The weather was very kind and Cagney a Lacey had a special test when they met horses for the fist time. They did themselves proud.
The big adventure started on Saturday. Elizabeth came over to collect a very excited Cagney and Lacey. Rob went off to the RV storage to load and hitch up the fifth wheel. We met up in the car park at work and then set off on the 350 mile trip to Niagara Falls. This was my first big trip out with the trailer and was a bit of a nervous passenger for a while. All went well. The roads were not crowded and the views were gorgeous up through tree lined hills. The Fall colours and the sunshine gave us lots to look at …. but not Rob as I made sure he was looking at the road. Towing a 40ft trailer means that fuel and food stops have to be thought out. You have to think like a trucker. Luckily …… there’s an Ap for that. (much to Robs disgust – he doesn’t like Apple) I was able to see the truck stops along our route.

We arrived after dark but the camp ground had left us site instructions and it was an easy “pull through” so no problem getting set up. That gave us plenty of time to go see the American Falls lit up at night and then a treat for Catlin at the Hard Rock Cafe. By the time we got back to the RV the oil filled radiators had done their job and we settled down for a toasty night. 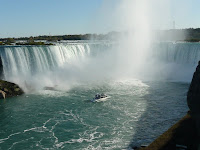 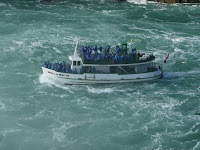 The next morning brought a bright blue autumn sky. It was chilly but a perfect day to sightsee. First breakfast at Catlins favourite dinner – Dennys.

After few more pancakes than is strictly needed, we headed off to park at Goat Island and then to explore the falls.

From the overlook at the US side of the Horseshoe Falls, we walked along to The American Falls and then over the rapids to Rainbow Bridge Where you cross into Canada. Catlin thought that it was funny that her Mum had made her walk all the way from America to Canada.

I had always been told that the Canadian side of the falls was “Tacky”. Whilst the seaside style amusements were

more evident, the parkland around the falls was clean and very well presented. The views are certainly the best. We were all glad that we made the effort. After a very long day we collapsed back in the RV with a carry out pizza and sore feet.

Next morning we were all up early and off to Letchworth State Park with breakfast on the way. It was an hour and a bit away through more 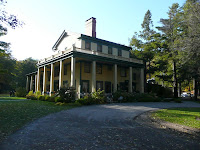 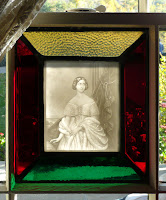 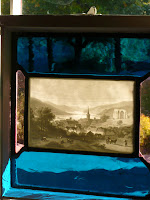 lovely countryside. Once again the weather gods were on our side with beautiful blue skies.

The park is centred on a gorge and a number of waterfalls. There are a bunch of paths set out through the woods with great views of the water. This must be the best time of the year. We spent the day at a gentle stroll while Rob ran around taking a million photos (of the same thing 🙂 There was even an ice cream stop deep in the woods. It is also possible to lodge in the park. We came

across the old place serving up afternoon tea on the veranda. Inside was quite ornate with stained glass set in the windows. It was lots of fun to travel with Kat and Catlin. Catlin even had time to carve up a Pumpkin. I can’t believe how quickly she is growing up.
Looking out of the window

today couldn’t be more different. The rain has been falling all night and there is a very autumnal smell in the air. The old boy has been blowing leaves around this week although they seem to be blowing back just as quickly. He asked me to include pictures of a couple of the wild creatures that he has found in the garden.