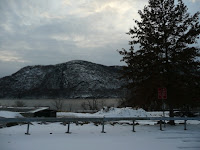 So I obviously survived the snow and the drive home ( my first ever in real snow) we had 8″ over night and it was a fun morning trying to dig the car out so I could get back to work. They obviously clear the roads very quickly here so they were fine on the Friday.

Saturday morning was a bright clear day although the temperature had dropped to 20 degree Fahrenheit which is minus 7 in real money !! Had an early breakfast at one of the local diners it was just me and all the guys off night shift from snow plough duty so I caused a little bit of a stir. I heard one guy had a British accent and as he was paying his bill the same time as me I asked how long he had been over here. He said he came over in 1968!! so please don’t expect me to lose my accent anytime soon. His observations on the people and the area were the same as mine. they really are a very open hearted generous bunch and like nothing more than to either feed you or try and do something for you . Later drove around looking for a mall to at least start my Christmas shopping and eventually settled for one in Newburgh. Stuck it out till at least four and then took a drive to a very pretty town called Cold Spring — 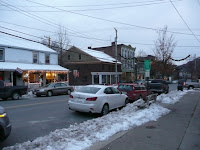 It is full of little antique shops, restaurants and gifts shops and is really nice to walk around. The only downside was the cold — when there is no wind you really do not realise just how cold it is until you are out in it for about 15 mins and then you suddenly realise you; are to the bone cold!

I decided to pick up a take away pizza from a really nice Italian place they have there and headed home with no plans to do anything on the Sunday as the forecast was for more snow and freezing ice. Sundays forecast was accurate so spent the day reading and sorting the place out for my last week before coming back to the UK. Monday morning I had to be in the office for 6.15 as we had some big announcements to make. But first I had to chip away the 4″ of ice on my car windows. Made it into work on time and what a day it was – wall to wall meetings – we had to tell all the staff that I was taking over as GM from the 1st January and at the same time announce that we had put in to buy another company that will grow our retail team from 350 to 900 employees. I know my future is safe but do not yet know what my role will be when the acquisition completes ( although I have a very good idea 🙂 )