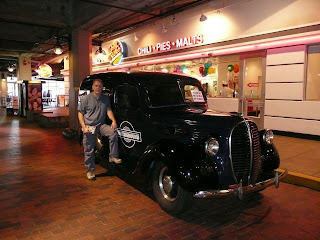 On Tuesday of this week we drove from Beacon to La Guardia to catch the flight to Atlanta. It was actually much easier than I thought it would be and took us about 1 hour 45 even with rush hour traffic.
Arrived in Atlanta and a car took us out to Paul and Robyn’s house, It is a lovely trip out there and the house is just amazing. We had a really great time on the Tuesday. Wednesday we drove to downtown Atlanta so that I could go to the Immigration and get my US status sorted at last I am officially here. We then had a look around and there is an area call Atlanta underground that has vintage cars like the one in the picture and lots of little stalls and gift shops. We also walked around centennial park which was built to celebrate the Olympics.
We went for a walk in the woods around the property when we got back and saw a family of deer and some eagles flying overhead. Nice to see come animals that are not just lying on the side of the roads as road kill.
The children arrived back with their grandparents and the boys went down to play pool in the basement. It has been a really relaxing day.
Woke up Thanksgiving morning and the food began! we had bagels and danish and french toast strata for breakfast. Appetizers all morning and then sat down to lunch at 1pm. There were 6 children and 10 adults. The food was fantastic and I had my first ever piece of pumpkin pie. After lunch the adults played word games and the children played outside. In the evening we moved down to the basement and played pool, video arcade games and just relaxed and chatted. Paul and Rob watched the “300” movie on a 60″ movie screen. Today has been a really great day, everyone has been friendly and relaxed and we have had so much fun. I really feel we are going to enjoy this move.
Today we have had a lazy morning we will be heading out for lunch later and then flying back to New York. Off to show Rob the new house tomorrow.