Our new chickens arrived the last week in May and a few days later we hatched 3 of our own eggs. Hard to believe that they came out of such a small egg. here they are probably no more than a week old 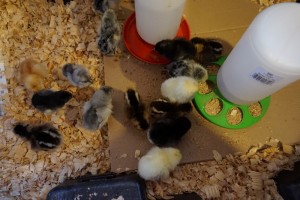 So cute, but they grow like the weeds in Georgia ( another post sometime soon ) for the first few week we could still spot the three we hatched but they soon caught up. After 2 months we moved them to the tractor coop, where they have continued to grow by leaps and bounds.

Yesterday they were big enough to start to be allowed out for a few hours in the evening, They are so big now it is hard to tell the little chickens from the big chickens.