We had an unscheduled trip to the vet last week. I’m not quite sure how he did it but Magic managed to lacerate his eye lid, overnight Thursday.  Luckily it was a clean cut and there was no damage to the eye or major blood vessels. 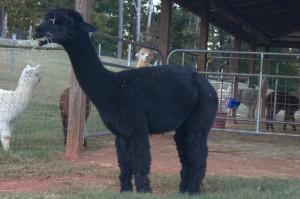 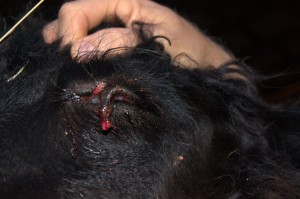 Miss Lynne was already on her way out as we made the discovery and so I’m pleased to say that Magic was a very co-operative boy for me, allowing me to capture, harness and load him into the trailer single handed. OK, it wasn’t entirely straight forward. He did hesitate when he saw the trailer and slipped his bridle. He quickly retreated to the unfenced pasture that is lush with winter rye grass. I can’t say I blame him.  On the second attempt he gave me a resigned look and a hum and then settled down for the ride to the animal hospital.

The vet took a quick look in the back of the trailer to decide the right action plan. It was clear that Magic was in need of a clean up and stitches. This would require a general anesthetic and could not be performed in situ.  Persuading poor Magic to get out of the trailer was no problem but asking him to go into the building, past the reception and into the clinical area was interesting. It took a few minutes but eventually took it in his stride. The dogs and cats didn’t know what to make of him.

We reversed the process a few hours later and he was very pleased to see his friends back on the farm. I just have to give him a short course of antibiotic shots and he will be as right as rain in no time. All in all, not as much trouble as Lacey’s emergency vet trip just about a year ago.