This weekend was the Georgia Alpaca show. The plan was for me to go over there on the Saturday and then meet Rob at a friends house in Alpharetta as there was a 50th birthday celebration.

When I got to the show I went into the vendor room first and the results of the spin-off were in there. For those that do not know, this is a competition where you take 2 ounces of your Alpaca fiber and you are not supposed to card it or wash it, just take out most of the vegetable matter. The judge then spins it into fiber and  grades it across a range of characteristics. Well my boy won second place and more importantly I did not lose any points on my prep.

Off into the main arena to see George and Judy of Walnut Knoll Farm. They are great friends, good mentors, have really high quality Alpacas and on top of all that also roast and sell their own coffee beans. Here is a great picture of them off to get water for their herd. 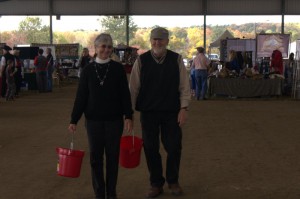 They had a number of Alpacas to show and as Judy was getting ready to go into the ring, her girl cushed down without her realizing and Judy fell backwards over the top of her. Resulting in a badly sprained ankle. 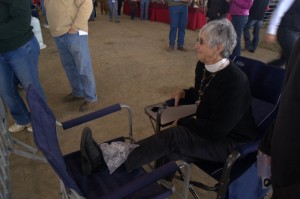 This left them with a big challenge as they had Alpacas that needed to go into the ring at the same time. So George quickly trained me on what I needed to do in the ring and introduced me to KC my first boy that needed to be shown

KC was really well behaved — walked nicely and let me show his teeth and also behaved when the judge was checking his fiber. He came second but got really nice comments from the judge.

Dashed up to the party and got there late but at least in time for birthday cake. Sunday we were up early and drove back over to the show to see how Judy was. Still with a strapped ankle so after checking the times for the ring – I stepped in to look after WInston, it was his first time so I had a quick chat with him to tell him what I needed him to do.

Judy’s daughter was also helping out so here we are with the three amigos waiting to go into the ring.

As George and Dawn went into the ring, Judy realized that the girls classes were going quicker than expected so we then had to give Rob the training course and he went and got Ice Dancer from paddock and started getting ready to show. 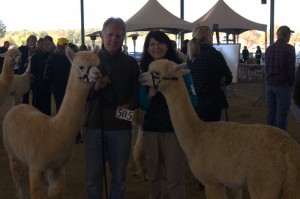 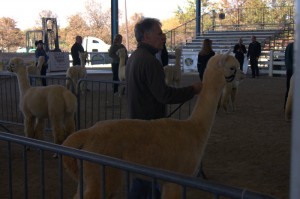 Winston was getting bored and fractious by the time we went into the ring. He was ok doing his walk and the Judges checks. But when he was selected to go before the Judge again in 6th place, he forgot our chat and decided he had had enough and lay flat out on the floor – everyone burst out laughing even the Judge laughed and came up and thanked me.

We drove home lunchtime as we were expecting friends to visit – They came armed with cake and flowers, what a great combination. It was lovely to see them and the girls had fun in with the Alpacas.

It was all in all, despite all the running around and the drama, a perfect weekend.