So ……… Here we go…… 4 weeks ago I was offered a new job that I accepted, but the thing that caused panic was the imminent start date. Hence the lack of any regular blogging. But it certainly warranted a catch up. My sister arrived late on October 7th for a little mini break, boy we walked some miles and had a lot of laughter along the way.

On the Sunday we walked out the back of our property and down to the river, it is only about two and half miles in total but it was very warm and humid so we were “glowing” like crazy by the time we got back.

We also spotted a very interesting footprint – too large for dogs or fox, either a very large coyote or a mountain lion.

Monday we took the dogs to the Sweet Water Park for a very nice six and a half mile walk – it was nice and quiet there and the temperature was not too bad under the trees.

We were so tired after it all we decided to stay home and have some home made pizzas. Tuesday Miss Kat and I decided to give Mr Rob a break so we went shopping to the Dawsonville Outlet Mall. We managed to stay there most of the day and I will let you guess how many bags got loaded into the car by the time we were finished. Quick trip to Outback Steakhouse for dinner then home to relax.

Wednesday we decided to give the Silver Comet trail a go and Mr Rob drove us to Lithia Springs area to get on the trail. It is really good its a rail trail so flat and well cared for. It was surprising how many people we passed either cycling, running or walking especially as it was mid week. We also managed to see 2 snakes, a praying mantis and a lizard.

Mr Rob came to pick us up at Hiram not before Miss Kat managed to get herself into the police vehicle that patrols the trail.  The two policemen were very friendly and were happy to let her sit in the car. Miss Kat left that evening and we were sad to see her go.

On the Friday we left for Callaway Gardens as we were helping out at the Fiber Festival, we had to take both vehicles as I was starting work on the Sunday in New Orleans. The show went well although we could have done with a lot more foot traffic. It was also the first time I got to show off some of my bags and I was pleased how well they were received.

New Orleans was interesting as it was the new companies client conference, I flew from there to Kansas then home on the Friday. Last week was spent in Hartford which is where I am going to be spending a lot of time in the future, which is hilarious given my move south but at least I will get to see the autumn leaves in the north east. 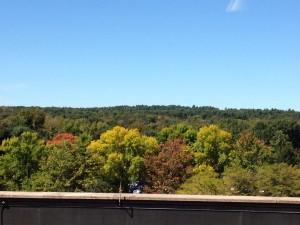