It’s a husband’s job to get nagged into doing “stuff” that you promised to do ….. eventually. But when other peoples wives start chirping in … well I suppose I should not have left it so long.

It’s only in the last two or three weeks that I can say winter has left us. It’s been a long, cold New York winter. It’s not that we had massive snow falls. We just seemed to get top ups every week and then just as we thought it was all 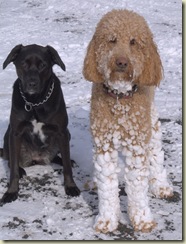 melting away …. down it came again. That means lots of shovelling for me, to keep the back deck clear, and the eventual melt water away from the house. There was so much build up that I had to get up the ladder and clear the roof at the back. It’s a long way down! I always get lots of help with the snow jobs though! 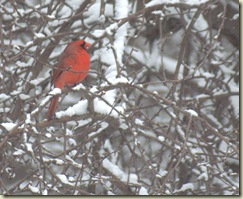 The snow hangs around on the ground but we do get lots of beautiful blue sky days. It’s still much too cold to go licking lamp posts but it looks great. We try to help out the birds. Well the do put on a fab show for us all year ‘round. The Cardinals brighten any bleak winter day.

Winter does have good bits. We are only an hour or so drive from skiing. We really should make more effort to ski more. The resorts do low cost lift passes mid week for locals.

Lynne has been flying off to Florida most weeks this year. The relief from the cold has been tempered by the hassle of flying in the USA. On the plus side, we have a local airport, so avoiding the trek to a major. The down side is the need to make connections – mainly Atlanta. Given the seasonal storms, the journey has been a little incident packed at times. Blizzards, engine failure, wild fires and tornadoes have all played their part in an eventful life as a travelling business consultant. The “sorry” letters keep coming offering more free Delta air miles. It looks like the Florida gig is over now so hopefully the girls and I will see more of her.

After a nudge or two, I was persuaded that I should take a trip back to the UK. Well it had been over a year. Right up to the last minute, the weekly snow storm kept me guessing. The weekly dump had fallen as rain on the coast so the airport was all systems go. Car rental problems aside, it was a good journey. I got to the pub with my brothers and sister – a rare event even when we lived there. As always, a trip back to the UK means a frantic road trip. Up to the Clacton area to see Claire and the girls. Then on to Peterborough to visit Michael and his (now) fiancée Claire. Sorry that I couldn’t get down to Wales but I only had a week. It was good to see long time friends and enjoyed the visit to Sue and Malc, and walking in the New Forrest with the dogs.

Back in Pine Bush, the winter was still ongoing. Our last significant snowfall was in the last week of March. Spring time usually kicks in quickly here. Like somebody flicked a switch. Well not this year. There were a couple of teaser warm days but the cold weather persisted well into April. Eventually the daffs forced their way into the light but the trees didn’t get budding until May. The critters were pleased to see the back of the snow!

We’ve become strangely social recently, falling in with a local crowd and have taken trips out to “sound alike band” 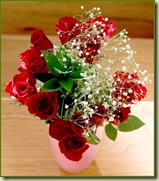 concerts, wineries etc. At times, it’s difficult for an atheist, socialist to hold his tongue but they are gracious and allow me the occasional rant while poor Lynne just rolls her eyes. As a result of all this new found congeniality, I was completely unable to ignore Valentines day. We went dancing. There were flowers, chocolates, donuts (hardly traditional, but a commercial reality) and it’s all done for another year. 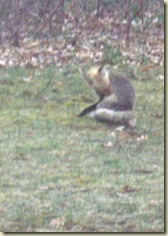 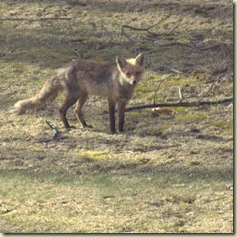 With the final retreat of the snow cover, animal life started to become more active. I was surprised to see a coyote in the back garden and, a few days later, a fox sunning himself in the front. Meanwhile, Cagney was just surprised by an encounter with a skunk! Luckily I stopped her from coming back into the house and, as it was gone midnight, she spent the night in the garage. Lacy was upset to be separated but it was for the best. The following morning was bath time for the “fluffy” one. She was not too impressed but accepted her fate and even enjoyed the towel dry rub. Photos were taken by Caitlin who I’d collected from the airport the day before.

So Caitlin came to visit from Scotland. Meanwhile Kat and Iain were on their way to join us via China and California. We had a plan to do lots of hikes and photography but that was a little disrupted by lots of rain. Still, we did mange to get a couple of trips in and I can definitely see the change in her later photos. Ever the adventurous type, Catlin was keen to get a “different” view! We also managed to get out, on a very misty morning, to visit the home of former President Franklin D Roosefelt. I missed the Library last time so it was good to see some of the history. Hopefully it also helped Caitlin’s school project too. 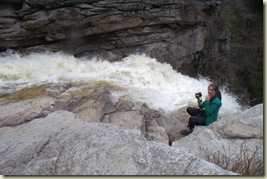 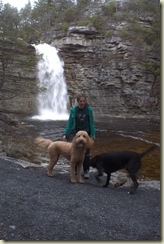 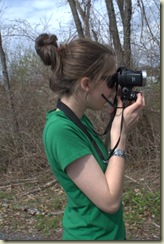 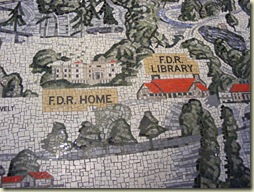 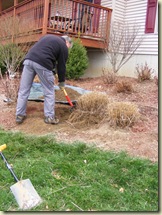 With the big spring “switch” just about to be thrown (the daffs), it was time to do some garden work and get the grasses dug up, divided and replanted. We couldn’t get down the front path by the end of last summer, they had grown so large. So we now have four grass plantings at the back to help fill out the beds.

Kat and Iain arrived with treasures from the east and pictures of bulk tankers and other nautical tails (it was a working trip after all). Thankfully, the weather had improved and we were able to get out on a number of good hikes. Iain and I had done over 30 miles by the time they left. It’s a good time of year to walk as the temperatures will make it more uncomfortable in another month. We walked the popular “rail trail” for a lunch at a dog friendly cafe in New Paltz. We also took walks around the Miniwaska Lake and mountains. Young snakes were about sunning themselves. Walking wasn’t enough for some. I’ve never understood this running thing. Their time was soon up and off they all went, back to bonnie Scotland. Come again soon.

Not wishing to get out of the walking frame of mind, Lynne planned our first walk in the “Bear Mountain” area, south of us down the Hudson. It was a well marked circular trail that took up up and around the mountain for a good view of the Hudson and the Bear Mountain Bridge (completed in 1924). Over the last century this area has been turned over to park land with a small village community gradually being bought up and the houses levelled. There are still traces to be seen. A very pleasant day out. 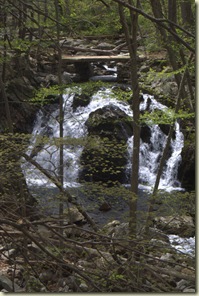 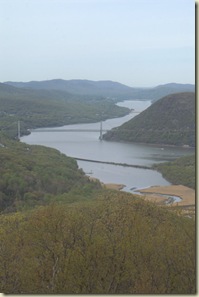 As spring has rolled (not really a switch this year) into high gear, and with lots of rainfall, the grass is growing like topsy. (what is topsy?). So have the dandelions. I have resorted to getting on my hands and knees to dig them out but I suspect that it will end up being a thankless task. The daffs may have been first but the remainder of the plants have been following on quickly. The bushes that I had pruned back are full of new growth. The Hostas are suddenly giants and the Allium are all out. We have even made some time to get outside to relax. 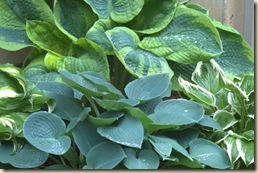 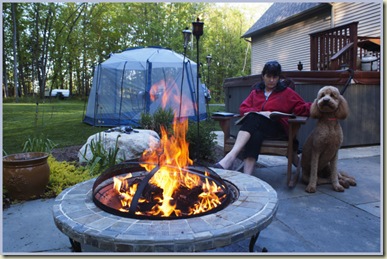