With a break in contracts for Lynne, we were able to get away and explore some more of this great country. After the crazy heat of last summer we thought it would be good to go northeast and towards the cooler coast of Maine. With no other plan than to enjoy ourselves, it was a bonus that we were able to add on some time in the White Mountains of New Hampshire. In total we covered 2025 miles. 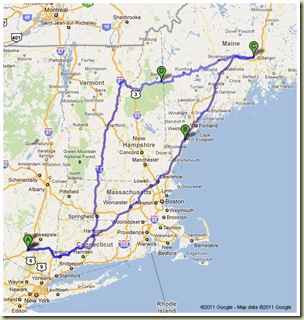 I had spent a few days checking over the RV and loading up ready to go as soon as Lynne had delivered her final project. The dogs had an early session with the groomer and we were hitched up and rolling by lunch time. 290 miles on a mid-week afternoon got us into the Kennebunk camp site before dark. That’s important to me as I like to see the space I have to back the RV into.

While I unhitched, connected the services and walked the dogs, Lynne sorted out the interior, pushed out the slide-outs and organised the food. The great thing with having a bunch of solar panels and batteries is being able to have the slow cooker do it’s job while we are driving. Mexican chilli chicken …. yum.

Cagney and Lacey are great travellers are are quite at home in the RV. Of course they also enjoy hiking with us. For the first week we were on the coast so there were lots of opportunities to get wet in the Atlantic. Generally, the beaches have to be clear of dogs by 9am. This meant an early start each day to make sure we were on the beach by about 7am. It was well worth the effort. It was great to stroll along the shoreline in the early morning sun and watch the girls run amok with all the other dogs.

It’s funny who you bump into whilst walking dogs! As we came to one end of the Kennebunkport beach the girls ran off to play with a group of people coming towards us. They were roundly seem off by the two small yappy dogs and we stopped for a brief doggy discussion. It was only as we walked away that I recalled why the white haired old lady looked familiar. It was the former First Lady, Barbara Bush. As we looked back holiday makers were walking up to her and shaking her hand. She seemed to have time for everyone.

The village of Kennebunkport was more “arts and crafts” than “kiss me quick” but ready to take the tourist $ none the less.

The local seafood industry was all around and I’m not sure it would have been possible to get a steak. I’m pleased that we went early in the morning as traffic was heavy later in the day.

Lynne planed a road trip north to see some other parts of the coast. Funnily enough, it seemed to take in a quilt shop! On route we got to see a truly huge globe at the HQ of Delorme and a giant boot at the flagship LLBean store.

The main point of the trip was to take in the rocky coastline around Plymouth and to see the first lighthouse in Maine.

A real bonus was this Osprey family that had built their home in one of the marinas. Apparently dad was out fishing …… typical!

Time came to move on to after another early morning beach run we hitched up and travelled 146 miles up to a site just north of Bangor. The main attraction for us was the Acadia National Park. It was an hour away but we were able to get a much less commercial (quiet)campsite. The hiking in the park was harder work than strolling on the beach but the views were worth every drop of sweat.

It was hot and painful work at times. We carried lots of water for the girls and they found shade whenever possible. We found blueberries.

One of our first hikes took us along the coastal path and across this gorgeous beach. Sadly no dogs were allowed so we couldn’t stop.

The park is best appreciated from the top and we took the long hike to the top of Cadillac Mountain. It was a hot 7 mile round trip rewarded by great views. The only problem is that we were joined by the coach parties and others that had driven to the top.

For our next hike, Lynne managed to find a recommended route up the adjacent mountains of Sargent and Penobscot. That was much quieter and gave equally magnificent views. It ended up being about 10 miles around (we  took an alternate turn on the way down). We all slept very well that night.

Sea food was everywhere and delicious. There was clearly a curry house somewhere but we never saw it.

We could have stayed in Maine much longer but we had to begin the trek homeward. We didn’t have a plan but had figured that some time near the Appalachian Trail might be fun. We ended up in a camp site in near the Town of Gorham, New Hampshire. This is right in the White Mountains area. 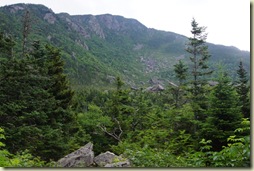 Hiking here was a physically tougher but the trees did give us more shade. We did a couple of hikes that took us to the edge of the tree line and the views before retreating back into the cool.

We took a “day on, day off” approach to hiking. Days off were spent sewing (Lynne), lounging (me and the girls) and general sightseeing. The camp had provided a very interesting map of scenic routes to follow. There were waterfalls and covered bridges to be seen.

The highest peak in the area is Mount Washington. There are several hiking routes to the top. We wimped out and took the easy way up. Easy, that is, if you are ok with very steep narrow gravel roads with steep drops and no barriers. At the top, we were literally in and out of the clouds as they blew by. As we watched the cog rail train climbing up to the summit, I was reminded of Snowdon. 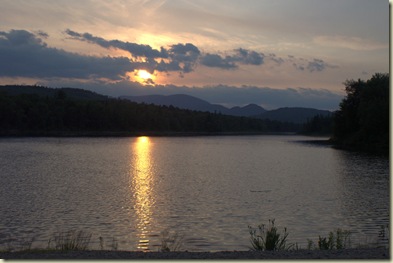 Lynne wanted to see a moose ………. I told her she was already living with one but that didn’t cut it. We were directed to a lonely back road called Thirteen Mile Wood, just before dark, as the best place to see them. All told it was a 50 or so mile round trip. We passed many “brake for moose” signs but did we see a moose? Lynne’s convinced that they are a myth made up by the tourist people. It was a lovely drive into wild country though.

And so our road trip came to a close. We packed our gear, hitched up the RV and drove south through Vermont, Massachusetts, Connecticut and back into New York. We saw lots of places we’d like to go back for next time. It was great to get away and see another small part of this BIG country.