There was lots to do before flying back to the UK for Christmas. Presents to buy, cards to create and quilts to finish. I delegated the cards to Rob. That kept him quiet for hours on the computer and it left me to get on with the knitting, sewing and quilting. Nothing like a deadline to get things done!


Of course Cagney and Lacey did what they do best. They didn’t know that they

were about to have an adventure of their own with their auntie Elizabeth who helped us with their training. She picked them up the night before we left. Rob was much more upset that they were.

very cold. All went well and we were soon through security and looking forward to our Virgin Atlantic flight. We had always been told how good they are. Oh boy, were we disappointed. OK, we were flying “cattle class” but there was so little leg room. My knees touched the seat in front and I’m a little person! The food was sub Micky D and to top it all we had the kids from hell sitting right 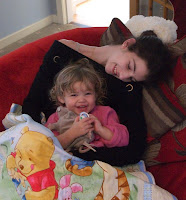 behind us. Rob also complained that the Trolley Dollies must have been the original crew or even their mothers. I thought that was a little harsh.
By the time we had landed in a snow covered London, collected baggage and picked up the rental car, it was late in the evening. The roads had earlier been impassable and as we drove further into the countryside we passed lots of abandoned vehicles. We inched along the icy lanes and finally pulled into Sarah’s driveway a little before mid-night. She was waiting up for us but Alana was, of course, sound asleep. I had to wait all night for a cuddle. 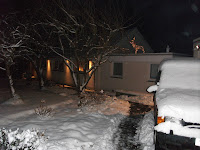 Not that I had a lot of time for cuddles in the hectic time between getting up and getting the two of them down to Reading station to catch a train to Wales and the Celtic clan. I nearly got stuck on the train as I helped load all the “little person” paraphernalia. I finally waved goodbye from the platform. We would meet them again, in Wales, the next day. 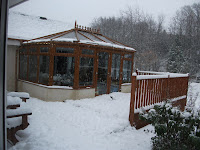 Next Stop Basingstoke where we spent a restful afternoon catching up with Claire, Lee, Georgia and Indya. Goodness, how fast the girls are growing up. Michael had battled through the snow out from London to save us a drive. I’m sure he’s put on a little healthy weight and looking a little less like a starving student. Anyway, the usually Grumpy Grandad was very pleased to see them all. All too soon we had to load up and hit the road again and set off for South 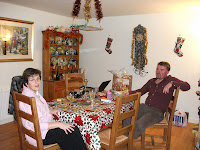 There was lots of snow around and it was well below freezing but we had good clear roads all the way and arrived to a hot cup of tea and supper. That’s the great thing about going home to Wales ….. you know that you’ll never go hungry, no matter what time you arrive. There’s something special about 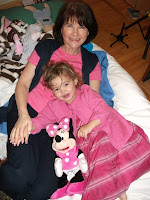 catching up with your Mum over a cup of tea. She understands and appreciates my talk of Sarah and Alana in a way that no one else can. That’s being a Mum I suppose.

I slept in for a while the following morning but Rob was up early and was treated to a cooked breakfast with all the trimmings. I don’t know where he puts it all. I had a lovely day with Mum and other family members popping in. Later in the day, Bill dropped of Sarah and Alana and the whole place was transformed in a way that only a 2yr old can. She is such a happy little thing. 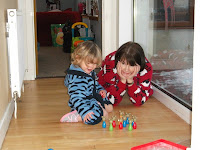 Sarah is doing a good job and my heart fills with pride again. All to soon we have to hit the road again and head for Sarah’s place in the southern tip of Oxfordshire.

Another all too short a sleep before setting off for Southampton via my old hair dresser. She knows just how I like it. We arrived with Rob’s Mum & Dad just

after lunch. They have both been ill in recent weeks so it was great to see them on the mend. It’s always relaxed in that house and there is a constant revolving door of brothers, sister, grand-kids and great grand kids. The teapot never empties and the pantry is always full. Rob had his usual in-dept discussion on some political scandal or other with his Mum while Me and Dad just prodded the fire if things were dimming. We sent Rob out to fetch Dads favorite fish and chips for supper before nipping out to the pub. Rob had arranged to meet up with friends Garry and Kim. We spent a pleasant evening rummaging through old stories of motorbikes, bands and the fact that it is nearly 25 years since Rob was the best man at their wedding. We were joined by Rob’s brother Dave and his wife (another Lynne). Also Charlie and daughter Jess.

We stayed with Dave and Lynne that night as Dave and Rob were off to the hospital the next day. Dave has been diagnosed with a pre-leukemia condition and the search has started for a bone marrow match. Lets hope things work out well. While they were away it gave me a chance to relax with another cup of tea (or two).

Next stop on the frenetic journey was, just on the other side of Southampton Water, Hythe and sister Sue, Malc and the dogs. There is a new puppy on the

scene to keep the old boy active (Dap, not Malc). Things were pretty chilled and clearly ready for the Christmas festivities. Rob was acting as a mule on this trip and handed over the goods. He didn’t even have to hide them about his person (not a nice thought). Paracetamol are so much cheaper in the USA! After even more tea (can never have too much) we set of again for the snowy

There was more snow on the roads and yet more forecast. We made the decision to collect Sarah and Alana and set off for Scotland that evening or we might not be able to get there for Christmas. It’s around 350 miles from Sarah’s to sister Kat’s place in Edinburgh. We set off at around 5.30 in the evening with the hope arriving soon after mid-night. Once on the major roads, we had no weather problems and the general forecast had frightened everyone away. We made very good progress until the snow started coming down heavily in Scotland. With about 70 miles to go everything came to a grinding

halt. There were trucks pulled over to the shoulder and others struggling to climb slippery junctions. We had been wondering if we were going to be stuck for the night but after about three quarters of an hour, at a stand still, the column slowly crawled away behind two snow ploughs. Fortunately, once over the high ground, the road was relatively clear again and we slid and slipped into Kat’s place at around 2.30 in the morning. Thanks to Kat and Iain for waiting up with a warm welcome.

For the first time we were able to relax and do nothing. No travel for three whole days. We were very well fed and watered. Amongst many delights, the 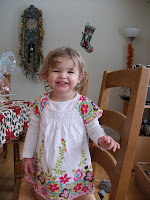 bird inside a bird inside a bird …… was scrummy and Rob said that he really enjoyed the fruit. Christmas morning started early and we enjoyed our first Christmas Day with children for many years. There was Catlin, Calum, Abigail Sarah (still my little girl) and Alana. So much fun. With dogs to walk and books to read, even grumpy grandad enjoyed it. To top it off, the snow was falling outside. I think it’s the first really white Christmas I can remember.

With an eye on the weather and knowing that there would be more airport security, we decided to set off South on Boxing Day. As we drove away from Edinburgh, the sun was shining on the beautiful Pentland hills. The snow

covered hills were dotted with cold sheep and crazy walkers. The long journey south was without incident and I’m glad to say that the temperatures were a lot milder at Sarah’s house that when we left. Having the extra day allowed me help Sarah get sorted and Rob to spend a few more hours with Mum and Dad.

That evening we (I) said an emotional goodbye to Sarah and Alana and headed off to the airport hotel in readiness for the unknown security adventure. It turned out that we all had to be searched at the gate. We eventually got away. I have to say that the Continental flight back was much better that the Virgin one on the way out. And so, back home to rural New York State.