It’s been a little while since I wrote to the blog and I can report that we are fully recovered from the excitement of the Welsh invasion! All enjoyed the cruise back across the Atlantic into Southampton. I hope to get some photos soon.

Thankfully I was able to arrange another playmate to come over to keep Rob out of trouble. Sister Sue and Malcolm sent Patrick over for a week. I’m not entirely sure what he expected but I think he had a good time ………… and I think Patrick enjoyed it too! 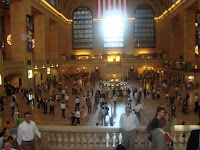 The three of us took a picturesque Sunday train ride down the Hudson river into Manhattan. We walked and walked ……. and walked. From Grand Central Station, through Time Sq, up through Central Park to the Metropolitan Museum of Art and back to Grand Central Station. It was a lovely walk but very hot. At least Patrick was able to tick off a few things on his extensive list. 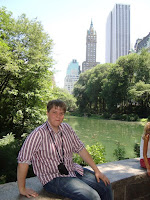 For the rest of the week I had heavy work commitments and so Patrick was left to keep Rob amused all by himself. I think he did a pretty good job. Especially the whole day spent at Woodbury Common outlet centre. I know how much Rob secretly enjoys our visits there and is never happier than when he is carrying my bags allowing me to flit from rack to rack; store to store. Patrick was able to stock up for all those College essentials. 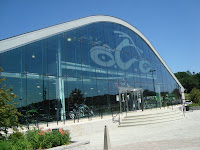 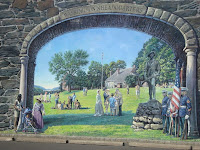 A second trip into NYC was abandoned due to a lack of parking at the station. Instead the boys did some local sightseeing including the new HQ for Orange County Choppers.

The following day I dropped them off at the train station for an early ride into the city. It was another marathon walk to take in the sights from mid town to down town. 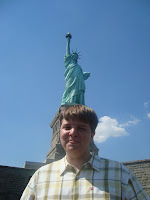 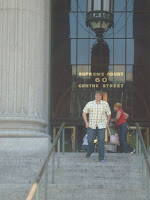 No, this isn’t a scene from the new series of CSI NY, but Patrick walking back down the steps of the Supreme Court building, having gallantly helped a mother with a buggy. Doesn’t it just restore your faith in young people?

Following the exertion of “Manhattan in a day”, I think Rob needed a rest so Patrick spent pretty much the whole of the next day immersing himself in the cultural experience that is American comedy TV. He tried several times to explain “Friends” to Rob but I’m not sure that he succeeded at any level.

I think Rob found the excuse he needed to exercise his inner child. He took Patrick for a day trip into the Catskills, not to see the beautiful forested hills but to float down a mountain river on lorry inner tubes. There were no photos but you can get an idea from the web site www.towntinker.com 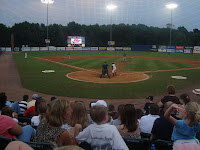 We had the opportunity to go see the local baseball team. It’s a big family thing with lots for the kids to get into.

Now that Patrick has gone home I have to dream up lists of jobs to keep Rob amused. Thanks for for giving me a week of Patrick.

Things have been hectic at work as usual. I did give the office a little light relief at my expense the other day. I was explaining that I was having to go visit a client and asked where in the US “Ar-can-sus” is. The office fell about and explained that Arkansas is pronounced “ar-can-saw”. I felt a little bit of a plonker but it’s ok. I’m going to send them all to Wales …. Llanfairpwllgwyngyllgogerychwyrndrobwllllantysiliogogogoch

I’m writing this from my hotel room in sunny California. A little bit south of Los Angeles. I’m here for the rest of the week after hops between Newburgh (home), Atlanta, Little Rock and Huston. I can’t say that I’m a fan of air transport in the US. It’s not a very customer friendly experience. I just hope they get me back home to my own bed on Friday. 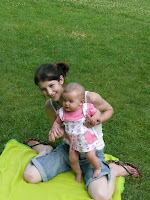 So here I am, 3000 miles to the West of home and only a couple of weeks ago I was 3000 miles away in the UK. I was in a rush as always with customer visits. The highlight was being able to be grandma for the day. I was able to spend a whole day with Sarah and Alana which was very precious. It’s lovely to see them together and share their time. Alana is growing fast and is a very happy and contented little girl and I’m so proud of Sarah for the care gives. It was so nice to hug them both.

Apart from bringing back memories of a lovely day out I was able to scratch a long standing itch. I found a Nintendo Wii calling me from Dixons. I’ve been trying to persuade Rob that it’s a good idea for ages. Anyway, I’m sure that Georgia will have fun with me when she comes over in a couple of weeks time.

We have another new addition to family ……. a hot tub. It’s fabby and a great way for us to relax together at the end of the day. Rob wired up the TV system so we can enjoy a soak in the tub, a glass of something cold and catch up on CSI …….. perfect. 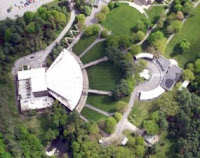 We have been trying to get out to music events since we have been here. The latest was last friday night at the performing arts centre in Saratoga, about 120 miles north from home. We went to see The Police supported by Elvis Costello. We arrived really early and had to wait to get in. We still didn’t manage to get a good space on the lawn (well there wasn’t much lawn left anyhow) But, in the end we found a space behind the camera stand. The operators kindly moved their stools and gave us a perfect view. Elvis was in the best voice and gave a great performance. Sting came on and sang on “Alison”. Not all of the 20,000 crowd were in place to see this part of the show but those that were there got a real treat. 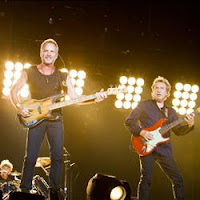 After a short break, The Police took to the stage accompanied by the full lighting and video support. They were greeted enthusiastically by the 20,000 strong crowd (in a way that only Americans can). We were treated to a really good run through their popular songs with plenty of opportunity for audience participation. Lots of clips on You Tube. It was a very good night out …… even if we were both knackered when we got home.